The Big Island of Paradise

We flew to the Big Island of Hawaii today with friends, Sally and Jeff. Mark and I have been here before, but our friends are first timers. We’ll spend a week here and then a week in Maui.

We connected through LA, and our landing was delayed about 30 minutes by heavy rain. When we looked at the radar, there was a pretty narrow window between storms. Once we landed, it started pouring, which caused the next flight to be delayed about an hour. In spite of all of this, we didn’t experience much turbulence.

After a 30 minute drive from Kona, we checked into our timeshare at King’s Land Resort. It was too late to do anything but unpack and go to bed.

King’s Land is a Hilton Grand Vacations resort, with access to their hotel in Waikoloa. We took a shuttle and did some exploring there. The hotel has several restaurants, pools, a spa and shops, of course. You can swim with dolphins in their dolphin pool.

Morning view from the deck

Jeff and Sally in front of Hilton waterfall

We also visited one of the shopping centers on the Hilton grounds, then returned to our condo in time to catch a beautiful sunset before preparing dinner. 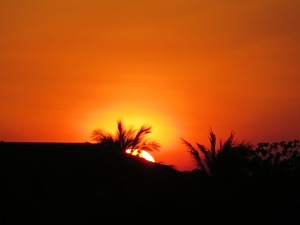 Sunset viewed from our deck

I love to travel.
View all posts by kcbernick →
This entry was posted in Hawaii Travel, USA Travel. Bookmark the permalink.