If you’re in the neighborhood, you should go. We are not country music fans, but decided we should experience this American icon, and we are grateful that we did.

This show is broadcast live over the radio, commercials and all. It made me think of Garrison Keillor’s “A Prairie Home Companion“, but without the ketchup or powdermilk biscuits. Also, it may have been a little too exuberant for Lake Wobegone’s bachelor Norwegian farmers.

The Grand Ole Opry show was founded by George D. Hay, and first broadcast in November, 1925. It was called “The WSM Barn Dance” at that time. Many country artists have launched their careers through the Grand Ole Opry.

FYI: “A Prairie Home Companion” was broadcast one night from the Ryman on June 4, 1994. 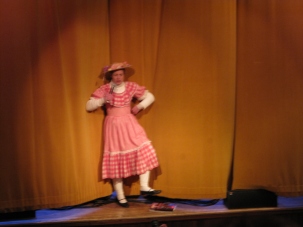 A Minnie Pearl Impersonator entertained us for a few minutes before the show started. Minnie Pearl, born Sarah Ophelia Colley Cannon in 1912, appeared at the Grand Ole Opry for more than 50 years, from 1940 to 1991, about five years before her death in 1996. She always wore a flowered hat, with her signature price tag hanging off the side.

Performers at this evening’s show, in January, 2012, included Emmy Lou Harris, Vince Gill and a host of other entertainers we weren’t familiar with, like Craig Morgan and Shawn Colvin. I especially liked Shawn Colvin and purchased one of her albums when we returned home. We were entertained by 91 year old Jimmy Dickens (who passed away in January, 2015), Jim Ed Brown, Jean Shepard, and the Opry Square Dancers among others. 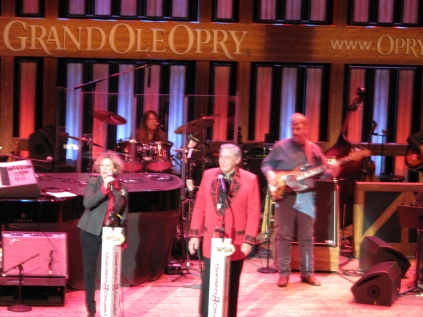