Many movies have been filmed in and around Sedona, including a few I’ve actually seen, such as The Karate Kid, National Lampoon’s Vacation, Starman.  Gene Autry’s movie, The Strawberry Roan was filmed here, and there is a sidewalk plaque downtown to commemorate that.

The Sedona Film Festival is held here every February. This year was no exception, but we did not go to any of the movies, didn’t plan ahead. We also didn’t see any famous movie stars either, not for lack of looking (would have turned into gawking if we had.)

The Sedona area has attracted artists for decades, and has over 40 art galleries in the downtown area, and many more in the Tlaquepaque Arts and Crafts Village. It’s easy to understand the attraction for artists, with the surrounding red rock vistas. Actually, Native American artists lived around here for centuries, and there are many opportunities to see some of their work at nearby heritage sites and National Parks. 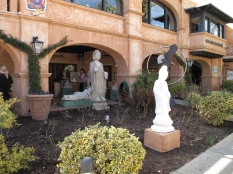 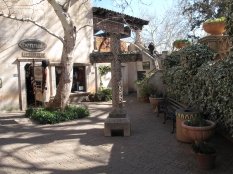 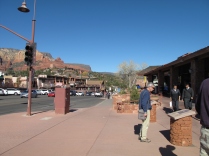 One of several colorful Javelinas in downtown Sedona

Sedona also attracts a few million visitors each year looking for the vortexes in and around Sedona (they actually spell it this way in Sedona.) These are defined as a place in nature where the earth is exceptionally alive with energy, and they are believed to be psychic places of power. There are four that are located in the town of Sedona. There are also innumerable shops, spas, psychic clinics, and more that will offer you the opportunity to part with your money to experience the healing energy. Take a mystical tour, purchase some healing stones or crystals, get a psychic reading or an aura photo. We didn’t do any of these things.

We visited the airport for the views there, which were spectacular! We went back another day to have breakfast there at the Mesa Grill. We’d heard that the breakfasts were very good there – it’s true. 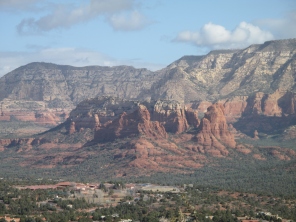 Next stop was the Chapel of the Holy Cross, which was built on a twin pinnacled spur about 250 feet high, jutting out of a thousand foot red rock wall.The chapel has wonderful views of the surrounding areas.

The idea for the chapel first came to Marguerite Bruswig Staude in 1932 in New York City while she was observing the newly constructed Empire State Building. When viewed from a certain angle, a cross seemed to impose itself through the very core of the structure. She wanted to replicate that, and build a structure that would glorify God. While traveling through Sedona, she was struck by the beauty of the area, and decided that the chapel should be built there.

The building of the chapel was completed in April, 1956. Although part of the local Catholic diocese, Mass is not celebrated there, just a prayer service once a week.

Chapel of the Holy Cross

I love to travel.
View all posts by kcbernick →
This entry was posted in Arizona, USA Travel. Bookmark the permalink.