When we left Sedona that day in late February, 2012, the weather looked clear to the north so we decided to travel via Jackson Hole to see the Grand Tetons. We took our last drive through Oak Creek Canyon, stopping at a lookout about half way between Sedona and Flagstaff. The views here were indeed stunning. 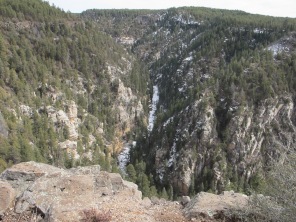 The terrain changes so much as we drive further north. From red rock desert to forest covered mountains, this truly is a beautiful country. 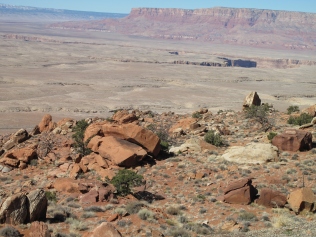 We stopped at Glen Canyon Dam at Page, Arizona. This dam is the second highest concrete-arch dam in the United States, second to Hoover Dam in Nevada. The dam was built as part of the Colorado River Storage Project, and became operational in 1963. Lake Powell, created by the dam, filled over the next seventeen years, and it has become a major recreational spot, visited by around 2 million people per year

The dam generates 1.3 kilowatts of electricity. Over 15 million gallons of water can pass through the power plant each minute. 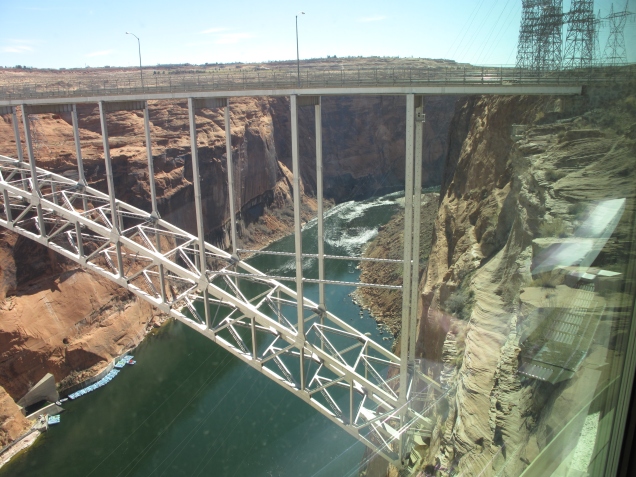 The weather still looked good when we arrived in Salt Lake City that night. The next morning, though, there was snow and wind forecast for Jackson, so we changed our plans to drive across Wyoming.

We did visit Mormon Temple Square to look around, but nothing was open that early. The square covers three city blocks, including the Temple, Tabernacle and Family History Library. 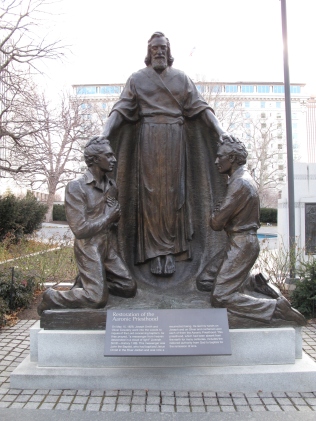 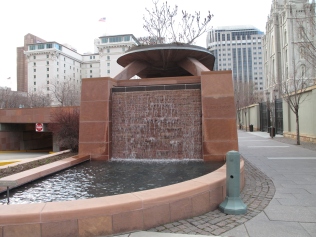 We also stopped at the Great Salt Lake just so I could take a look and taste the water – salty and brackish, ick! The wind was very strong, blowing sand across the road, and it was difficult to walk or even to stand up. 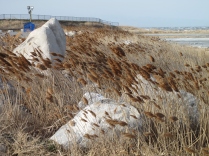 The drive across Wyoming on I80 was mostly a white-knuckle experience. We had driven about 100 miles when the snow started. With the high winds (gust of 50 mph,) we soon ran into white-out conditions, such that we couldn’t even wee where the exits were. Driving very slowly, and with hazard lights on, we finally pulled over and waited for things to clear a bit. Half an hour later, we started out again. Drove another hour and pulled over again for about an hour. Headed out again, wondering if the freeway would be closed (it probably should have been.)

After seeing one semi flipped over, another semi and several cars in the ditch, and when the road got very icy, we checked the road conditions online and learned that there were black ice conditions further down the road. We gave up, used the smartphone to reserve a room in Rawlins, and were very grateful that we did. The motel lobby was full of people looking for a room that night. We covered only 300 miles in seven hours that day.

The next morning, we left the hotel only to learn that I80 had been closed during the night. Rumor was that it was mostly to allow accident cleanup. We found a nice restaurant, Cappy’s in Rawlins, and had comfort food for lunch – hot beef and hot hamburger sandwiches – really good! If you’re ever in Rawlins, I recommend you dine at Cappy’s.

I80 was opened up shortly after noon, and we took off again. There appeared to be hundreds of semis on the road – all backed up from the previous day’s storm. 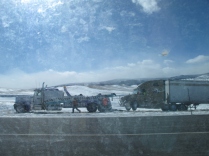 It sure was good to get back home. This trip reinforced my opinion that I never want to live any place where there are gates that can be used to close the freeway entrances due to snow. Unfortunately, we do have a few in Minnesota, but not too close to home.

I love to travel.
View all posts by kcbernick →
This entry was posted in USA Travel, Utah, Wyoming. Bookmark the permalink.