People on the Outside of Baranof Island

I’m thinking this is a pretty boring name for a town, but I didn’t pick it. When the Russians, led by Alexander Baranof, established a town here in 1799, they first called the settlement Mikhailovsk. The island that the town sits on is named Baranof. The Tlinglits weren’t too happy with Baranof’s invasion so the destroyed the Russian fort and killed most of its settlers in 1802.

Undaunted, Baranof returned a few years later and defeated the Tlinglits. He then build a new trading post named Nova Arkhangelsk (New Archangel.) This community thrived on trading for several decades until the Russians left in 1867. Not long after, Alaska was turned over to the United States and the community was renamed Sitka, from the Tlingit word She-it-ka, which means People on the Outside of Baranof Island.

Sitka was the first capital of the Alaska Provisional Government. The capital was moved to Juneau in 1906. Alaska became the 49th state in 1959. Sitka’s economy is dependent on fishing, timber and tourism.

We spent a few hours at the Sitka Sound Science Center doing a little volunteer work. The SSSC was part of Sheldon Jackson College, founded by Presbyterian missionaries in 1878 as a training school for native boys. The college closed in 2007 and the former campus houses a Fine Arts Camp for high school students every summer, as well as operating a salmon hatchery at the Science Center.

Some volunteers worked to harvest salmon for their eggs, some helped catalog equipment and documents, and we cleaned shelves – someone’s got to do it. The SSSC offers science classes for students in the summer, and were looking for help to clean up after the students went home. 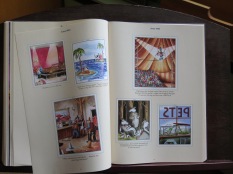 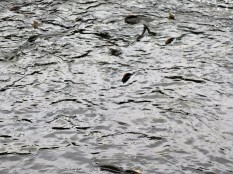 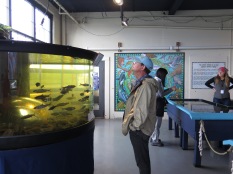 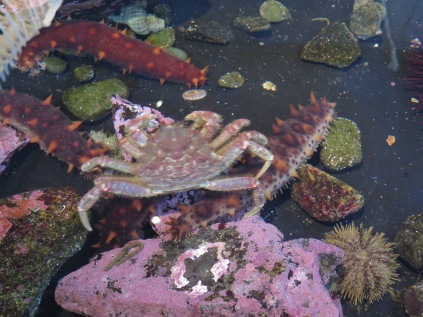 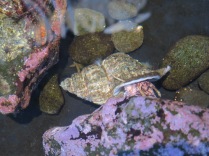 After our work was done, we toured the facility and its aquaria, and watched salmon attempting to swim up stream into the collection basins. Three varieties of salmon are harvested here – chum (or dog), sockeye (red) and coho (silver.) After harvesting the eggs, they are manually fertilized, which results in a fertilization rate of 90% compared to only 5% in the wild. The salmon are also identified by region – this is done by examining the otolith, the ear bone, which has rings that will look different based on the temperature of the hatchery where it was incubated.

We walked around town a little bit, but are really not enjoying this cold rain. Cold is OK (just barely,) and rain is OK, but both together for days on end is not. However, that’s the Alaska rainforest, and it really is beautiful, and we’ve been told that the glaciers look more blue when it’s overcast than when it’s sunny – seriously, I look a little blue then too.

I love to travel.
View all posts by kcbernick →
This entry was posted in Alaska, Crystal Cruises, Uncategorized, USA Travel and tagged Fisheries, Salmon, Temperate Rainforest. Bookmark the permalink.