We’re staying at the Talkeetna Alaskan Lodge located about 50 miles from Denali’s base. The grounds here are beautiful, and the weather has allowed us to enjoy our surroundings so very much. The fireweed here are releasing their seed already, so that means six more weeks before the snow flies. The fireweed plant can send up to 80,000 seeds per plant flying on the wind. 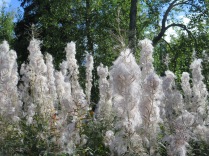 We have been warned that Denali is visible only about 30% of the time. Denali is so massive that it generates its own weather system. Staff here reported that they hadn’t seen it for three weeks, so this was indeed our lucky day. We rose early and didn’t see too much at 7:30 am. However, the clouds began burning off, giving us a phenomenal view by 10:00 am.

Denali is the highest peak in North America, at 20,310 feet, and the third highest of the Seven Summits – the highest peaks on each of the seven continents. Scaling all seven is regarded as a mountaineering challenge.

Denali is so massive that it generates its own weather system. If you wish to climb it, you must first register at the Walter Harper Talkeetna Ranger Station, where you will meet with Rangers to review the rules and risks of the climb. It takes about two weeks, since a climber must stay at the various stations along the way to acclimate to the altitude. No oxygen is carried by the climbers and many will succumb to altitude sickness even though they exercise the proper precautions. Only about 1,200 are allowed to attempt the climb each year, and just over half will actually reach the summit.

Until last year, Denali bore the name Mt. McKinley, for a former president who never even visited here. For decades, Alaska had tried to get the name changed to Denali (from the word “deenaalee” from the Koyukon language meaning “The Great One”) but the state of Ohio always objected (President McKinley’s home state.) 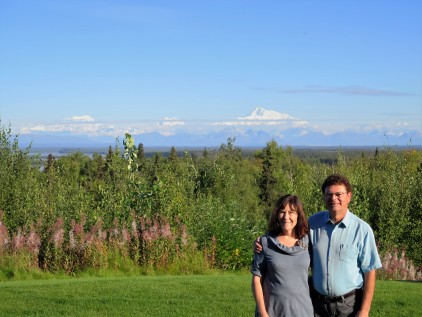 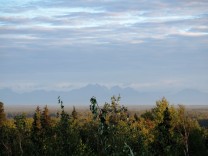 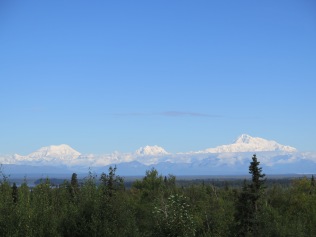 We hiked about two miles into Talkeetna , the town which supposedly provided the inspiration for one of my favorite television series – “Northern Exposure.” The town was founded 100 years ago as a district headquarters for the Alaska Railroad. It sits at the confluence of three rivers – Susitna (which was flowing very rapidly today,) Chulitna and Talkeetna.

Its fewer than 900 residents thrive on tourism. There are several art galleries, a few restaurants, and plenty of opportunities to fish, boat, try a zip line, land on a glacier, or fly around Denali. However, I read a recent article in the Alaska Dispatch News about the pressure that tourism is exerting on this small town, which is expected to see 300,000 tourists this year alone.

We were warned to be on the lookout for moose, and did sight quite a few. They weren’t too intimidating.

The Denali Brewing Company is based here in Talkeetna. We stopped at their Twister Creek Restaurant to sample some Purple Haze, brewed with blueberries. What a great way to get our antioxidants.

After dinner back at the lodge,  we attended a presentation  by a local ranger, comparing the first successful ascent of Denali in 1913 to a more recent one that she had participated in. It is remarkable that those explorers, Hudson Stuck, Harry Karstens, Willy Harper and Robert Tatum were able to achieve their goal. Their venture took about four months, compared to a couple of weeks for today’s climber. They each brought about 200 pounds of provisions, compared to about 80 pounds today. Even though modern climbers have better, lighter equipment and clothing, and have more knowledge, it is still grueling.

Our ranger made her attempt about five years ago, but her group stopped about 3,000 feet from the summit. The decision to continue or not can be affected by weather, health, equipment issues – a poor decision can result in death. When asked if she would try again, she said she had grown up around here and always thought she should make the attempt, but she didn’t say she would try again.

Following the presentation, we stepped outside to enjoy the beautiful evening. Denali was mostly visible again. It looks like a different mountain at night. Mark’s reaction was “How can a big rock that never moves change so much?” 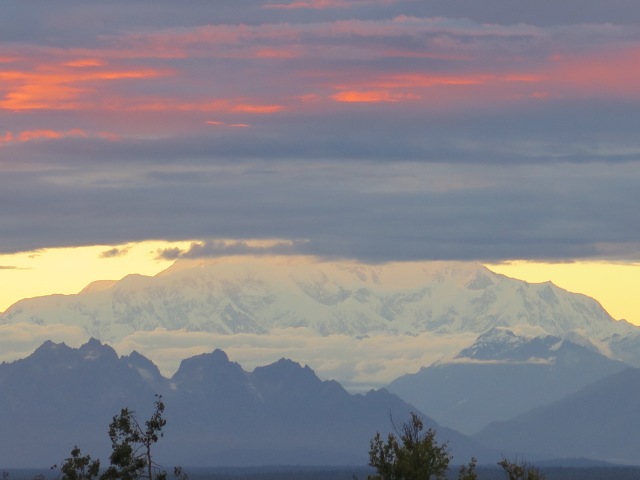