Our second tour of the day was by boat into the harbor to, hopefully, view the Northern Lights. With the snow and clouds earlier today, we thought we might not get to see them. However, the sky cleared up by early evening. Hooray!

Mark stayed back at the hotel, suffering from a cold, but the rest of us continued on our quest. On the boat, operated by Special Tours, we donned some insulated, waterproof jumpsuits before going to the top of the boat to await the show.

For a while, we didn’t think we’d see anything, but our patience was rewarded with a fantastic display. One of the guides said that he had been working this tour for two years, and that this was the best he had seen yet. (Do you think he says that to all of the groups?)

I had gone on-line to get proper camera settings to take photos of the Northern Lights. Apparently the instructions were incorrect, because I couldn’t get anything at all. Happily, one of the guides offered to change the settings, and I got some fair photos, considering the slight rocking of the boat.

The show started with just a faint arc across the sky, but then began to extend, widen and dance before our eyes. 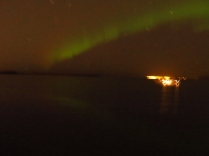 We returned to our hotel, discovered Mark was up, and got together for cocktails and talk. Mark had gone up to the roof of the hotel and was able to watch the lights, and get a few photos with his 360 camera. We stayed up way too long, but the excitement of this evening kept us going.

I love to travel.
View all posts by kcbernick →
This entry was posted in Iceland, Northern Lights, Uncategorized. Bookmark the permalink.