All Dressed up With Nowhere to Go

Or, how we didn’t get to go to Antarctica after all.

We had been warned that there was only a 50/50 chance that we would be able to go to Antarctica, but we were willing to take the chance. The tour was originally scheduled to leave at 5am and return at 5pm – a long day. Last night, the time was changed to 8am, meaning that we wouldn’t get as much time on the continent as originally planned, but that was OK if we got to be on land for a while, not to mention sleeping a little later. After a quick breakfast, we donned our attire and boarded the bus.

On our way to the airport, our guide informed us that we would not know for sure that we’d take off until after we got to the  airport. Even then, we had to wait while the pilots conferred with meteorologists about the forecast. Another group was scheduled to go yesterday, but couldn’t because of fog. The pilot can’t land if he/she can’t see the runway. We got our boarding passes which we hoped was a good sign. We knew that the latest the flight would leave was 10am, so we waited around in our hot gear, checked out the two tourist shops, and admired the hanging sculptures of whales.

The pilot came out at about 9:30 and gave us the bad news. It was foggy again. Earlier this morning, it looked like the fog would lift in time, but by now, it was clear that it would not. Even if we had flown out, there was always the chance that we’d have to turn back without landing, or that the weather would suddenly turn wicked and we’d have to leave in a hurry. Still, it was a disappointment. We’re consoled by the fact that we should sail by in a few days so we can at least see Antarctica.

In any case, we have our boarding passes as souvenirs as proof that we almost made it.

There were two guides accompanying us today, a mother and daughter team. Both are wild life veterinarians. The mother accompanies all of the flights to Antarctica, about half of those that are actually scheduled. The daughter lives in Santiago and comes down periodically to help her mother with larger groups. Her father is an ornithologist who was once stranded on Antarctica for several months because of bad weather. He lived in a cave and had to eat penguins to survive.

While riding to and from the airport, our guide told us a little bit about Chile and Punta Arenas. There are ten species of penguin in Chile, and three on Antarctica, out of 17-18 total species worldwide. Patagonia is so windy that trees can’t grow very high. Flags that are put out usually last only a few weeks before being blown to shreds. The wind can even be strong enough to blow cars off the road.

Temperatures range from about 36 degrees in winter to 56 degrees in summer. Crops can’t grow here so many homes have greenhouses for gardening. On the other hand, sheep do well here, and this is one of the most productive marine areas in the world.

Climate change is a serious concern for Patagonia as well as for Antarctica. In Patagonia, the glaciers are melting and lakes are drying up. There has been a rash of fires, some set deliberately, but it’s not known why. On Antarctica, the runways (three total) are built on permafrost, and if it melts, the runways will be destroyed. Our guide told us that the weather was far more predictable in the past, so that it was easier to schedule flights and be fairly certain that they could land.

Back to the ship, where we slipped into something more comfortable. By the way, I think my boots weigh 20 pounds, and my down parka is like a sauna (great for Minnesota!) We headed into town to do a little looking around. Our first stop was at Plaza De Armas Muñoz Gamero, the center of town, where there were several crafts and textiles booths to check out. At the center of the park is a statue commemorating Ferdinand Magellan, or Hernando Magallanes, or Fernão de Magalhães, depending on whether you are English, Spanish or Portuguese. Apparently, if you kiss the toes of the Indian near the bottom, you are guaranteed to return to Patagonia. 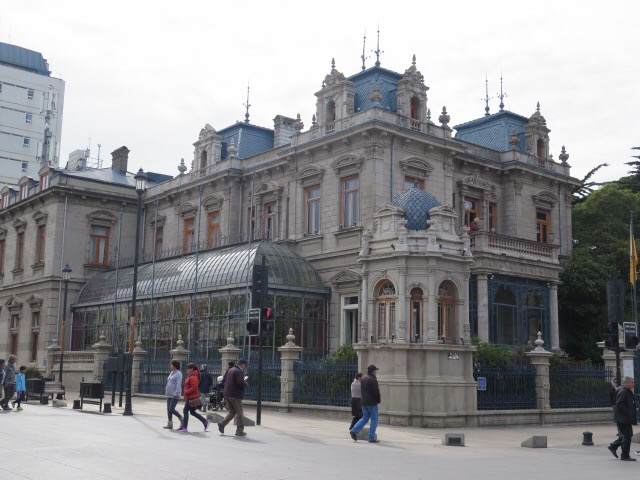 The Catedral del Sagrada Corazón (Sacred Heart Cathedral, across from the Plaza, was built in the late 1800’s, one of the first structures here to be built with brick.

We had lunch at La Luna Cafe, a couple of blocks from the center of town. What a delightful find! Not only was the food and service good, the restaurant was eclectically decorated, including a set table suspended upside down from the ceiling, stickers and posters on the walls, a large collection of beer cans and chandeliers made of pots and pans, flatware, wine glasses, etc. But the best was the art in the restrooms. 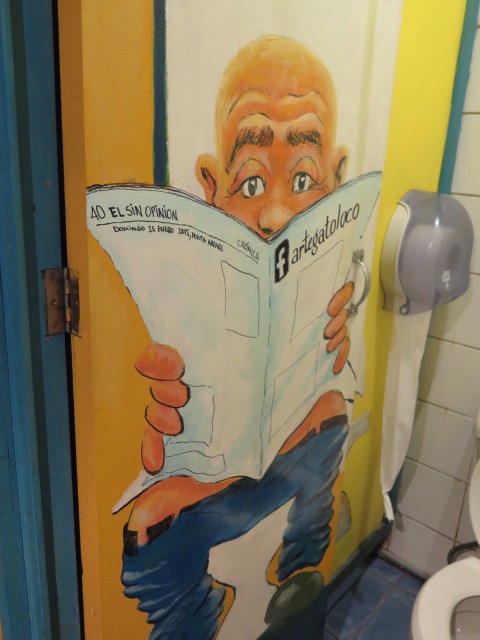 We’re leaving Chile tonight, on our way through the Strait of Magellan. The captain informed us that we’ll be passing by a large glacier around 5 tomorrow morning. Not sure yet if I’m going to get up for that.

I love to travel.
View all posts by kcbernick →
This entry was posted in Antarctica, Chile, Crystal Cruises, Patagonia, South America Travel, Uncategorized and tagged Penguins. Bookmark the permalink.

1 Response to All Dressed up With Nowhere to Go