Let There be Light

We learned of  the “Bruce Monro: Winter Light at the Arboretum” exhibit at the Minnesota Landscape Arboretum a few months ago, and knew right away that we wanted to see it. It’s been at the Arboretum since mid-November, but we’ve been too busy until now. It will be ending in mid-April, so we needed to make it a priority. Good decision!

Bruce Munro is a British artist who has been producing large light-based installations for several decades. He has had numerous exhibits in the US, the UK and Australia. Among the materials he uses are CD’s (a good way to recycle a dying technology,) acrylic, hay bales, fiber optic and water bottles.

There are seven installations at this site, two indoors and the others outdoors.  Over 2,700 hours were spent to design and construct them in the UK, then another 3,200 hours to install them here in Minnesota. They include over 70 miles of fiber optic cable.

We were first greeted by “The Good Seed,” inspired by The Chronicles of Narnia. It includes 19 lampposts that branch out like a seed head (reminded me of a dandelion.)

Inside the Arboretum’s lobby were hanging three “Chindi,” inspired by dust devils that Munro had seen while living in Australia. They are built of acrylic rods suspended in a helix form and lit using optical fiber. 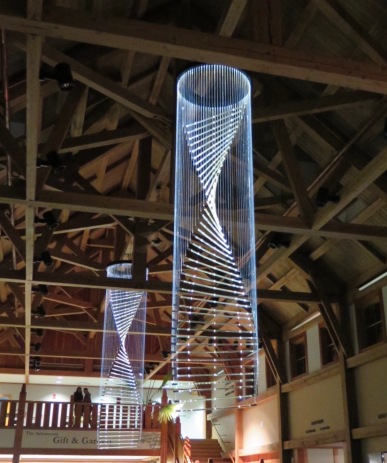 The other indoor exhibit, “Reflections,” projected light onto five smooth surfaces, displaying changing colors and sound. Each had a different pattern. 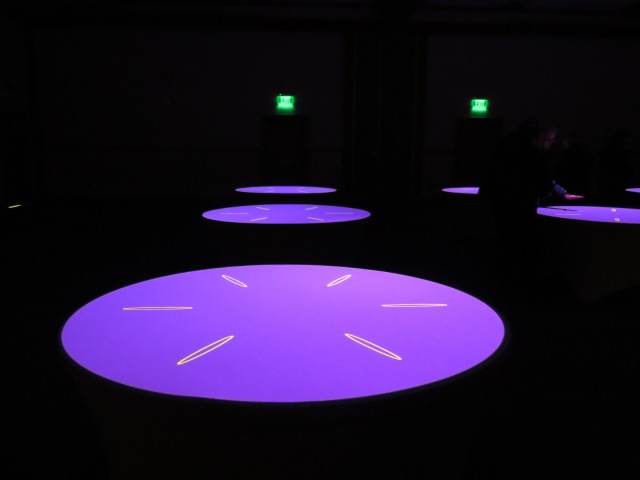 “Oreum,” one of the outdoor exhibits is truly a Field of Light. Thousands of stems are topped with bulbs that constantly change color. The stems sway with the wind, adding another dimension to the show. 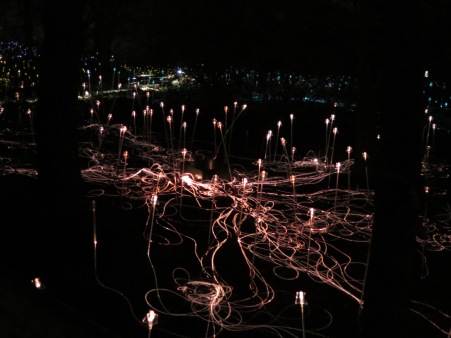 Ten (if I counted correctly) “Water Towers,” each include 252 bottles of water with light filaments that change colors. Inside each tower are speakers that broadcast music. They are intended to represent Earth’s natural pulse. It was very moving. 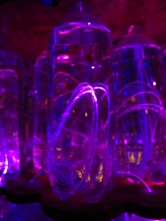 “Rhadamanthine Club” is a delightful take on a parliament of owls. Munro uses round hay bales, sides covered with black plastic, fronts covered with white plastic and a center black pupil. Colored spotlights blink on and off for each pair of bales, creating the owl’s eyes. We had seen them from the road as we drove up to the Arboretum, but we really couldn’t get the full effect until darkness fell.

The last installation, “Minnesota Gathering,” was created specifically for the arboretum. It is set in the sugar maple grove, where tubes run from the trees to the collection tubs. The sap started running early this year, in late February, and was still being collected today. Munro uses these tubes as perches for noisy birds. Tropical birds are represented by colorful clothes pins and a cacophony of sound. 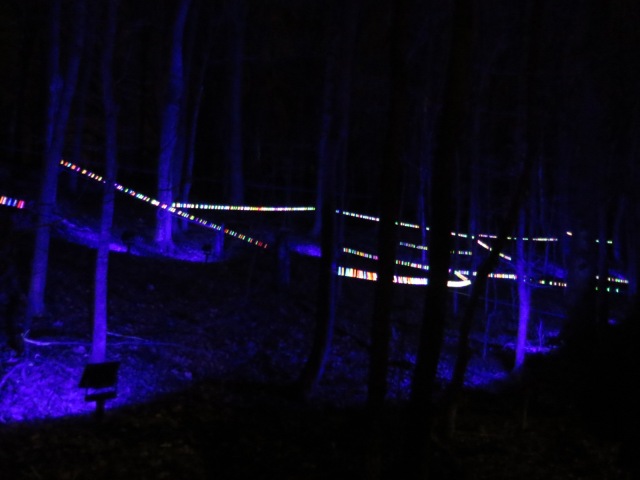