Another long day – up at 5am to catch our ride back to the airport in Johannesburg. We met up with the rest of the group (9 other couples plus two National Geographic reps.) We then boarded a DC-3 Vintage Aircraft Charter plane from South Africa air, and flew to MalaMala Game Reserve, located in  Kruger National Park. The flight was delayed about three hours due to fog near the camp. Once the sun broke through the clouds, we quickly took off before low lying clouds could set in again.

We are staying at MalaMala Main Camp, in a private bungalo that overlooks a popular stream. MalaMala is the name for the black sable, a very elusive creature. Almost as soon as we arrived, we spotted some waterbucks very close to the camp. Because of our late arrival, we barely got our bags in our bungalo before taking off for our first game drive. 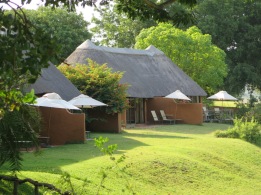 There are two National Geographic representatives. Vivienne Gunning is our Expedition Leader. She was born in South Africa and calls herself an Afrikaner. She speaks both Afrikaans and English, but it’s clear that Afrikaans is her primary language. She has been leading expeditions for Nat Geo for over a decade, and loves the work. Bill Branch, our National Geographic Expert, is a wildlife biologist at the Port Elizabeth Museum, South Africa. He is also a general naturalist who has described numerous new species and amphibians, and published six books and numerous photographs and scientific articles. He was born in England, but has been in South Africa for many years.

We will have the same guide for all of the game drives at this location. Each safari vehicle is carrying six tour members plus the guide and one of the National Geographic representatives. Our guide, Tim, proved his worth tonight as he relentlessly tracked a leopard that was on the prowl. Whenever he spotted an animal(s), he would find a good spot to view and take photos.

We came upon the leopard very shortly after leaving the camp. She was resting in the shade of some rocks, but soon got up to look for dinner. She was unperturbed by the four vehicles that were following her. We were warned to remain seated, and the leopard would simply think those vehicles were just things that were of no interest. If we stood up, she would recognize us as humans (I don’t know what would happen after that, and I didn’t ask.)

Patience pays off. We were able to watch the leopard stalk first one impala, then another. The first impala was fortunate to escape, the second one was not. After the first aborted chase, the leopard had to take a break – she was clearly breathing quite hard. She rested for a while, then resumed her hunt. The other vehicles broke off from us to look for other wildlife, but Tim continued to look for the leopard. We spotted her as she was stalking another animal which we couldn’t see. The leopard remained quite still or moved very slowly and quietly as she stalked her prey which was in the brush. Suddenly, she pounced and we could hear the cry of the victim. 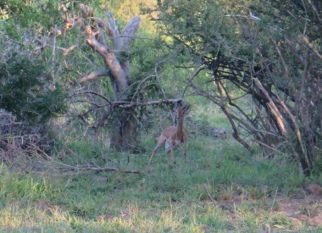 The one that got away

Tim backed away from where we had been watching, and sped off to find the scene of the kill. We had been watching from below a ridge, and Tim drove along the top of the ridge until reaching the area where the kill happened, then diligently searched until he found it. The leopard had taken down an impala which was still alive when we arrived. The leopard grabbed the impala by the throat until it died. Then, the leopard picked up the impala and dragged it into a nearby tree to remove it from other potential predators. I had no idea that a big cat would do such a thing. That was unquestionably the highlight of the day. In his pursuit, Tim drove through shrub if necessary – quite the adventure. The vehicle had to be repaired due to a broken brake line sustained to get us to the best vantage point.

The one that didn’t get away

We returned to camp after that, had a delicious dinner, and were entertained by several of the staff at the camp. It was really hard to stay awake, though. After learning that we would reconvene at 6am the next day, we hurried back to our bungalo for some much needed sleep. 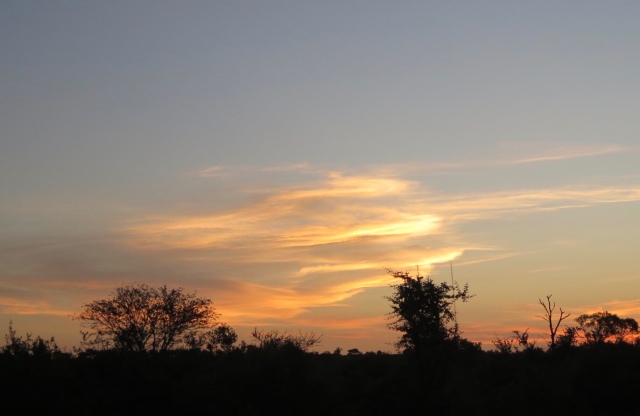 I love to travel.
View all posts by kcbernick →
This entry was posted in Africa, Elephants, Kruger National Park, Rhinos. Bookmark the permalink.