Every night I think we couldn’t possible top the experiences of the day, and the next day I am continually proved wrong.

We were told to be careful this morning as a bull elephant had been sighted in camp around 6am. Bill Branch said he had seen fresh tracks, and we pointed out the other evidence of a visit from a big elephant – a large pile of scat. It’s easy to identify the elephant’s scat because of its size and because it’s full of grass. Elephants will also eat leaves and tree bark. Many trees show evidence of an elephant’s meal. They also knock down trees and bushes as they are passing through.

Things were a bit wetter today, but that probably makes it easier to find fresh tracks. Our guide today, Lets, did an excellent job of finding interesting wildlife for us. He looks for the tracks along the road and listens for the sounds to determine which direction to go. We found vervet monkeys foraging among the zebras, a herd of bush bucks (distinguishable by a round white “target” on their rumps.) This sign, like the “M” on the back of the impala allows the rest of the herd to see each other in the bush. 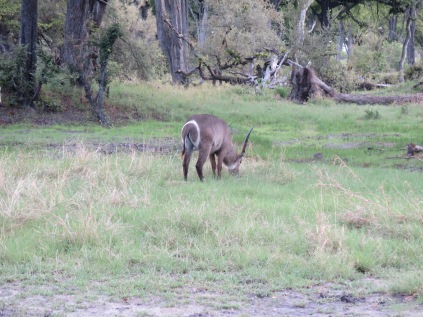 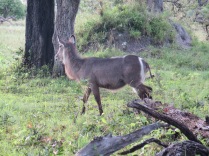 Lets spied several Nile crocodiles in a nearby pond. One was very large, certainly longer than 12 feet (they can grow to almost 20 feet.) It had captured an impala or red lechwe and was working on consuming it. To “cut” the prey into manageable sizes, the crocodile thrashes it around in the water. As the croc swam away with its meal, several others followed it, perhaps hoping for some leftovers?

We listened to a couple of African fish eagles call to each other. We saw a few brown snake eagles, which feed mainly on snakes, but will also eat lizards and small game birds. Our guide noticed some swallows raising a fuss in a tree, so pulled over and saw a python in the tree. This was a relatively young python, but he still looked scary to me. 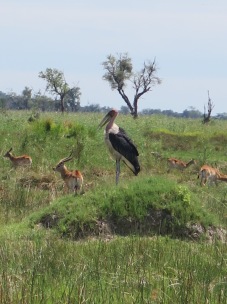 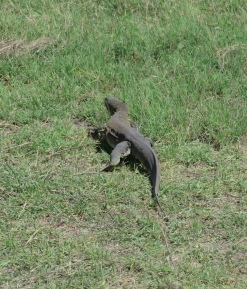 There were a few giraffes in the distance. These ones are a little darker in color than the ones in Mashatu, both the background and the spots. Lets could see that they were looking at something, so he headed off to find out what that was.

To our delight, there were two male lions resting in the shade. They are brothers about two years apart in age. The older one has a darker, fuller mane. Initially, they were lying down perhaps 100 fee apart from each other, but then the younger one walked down and laid down beside his brother – what a sight to see! Then, the lions obliged us by getting up and taking a short walk to another clearing. Here, each picked a spot, then sat down to pose for us. 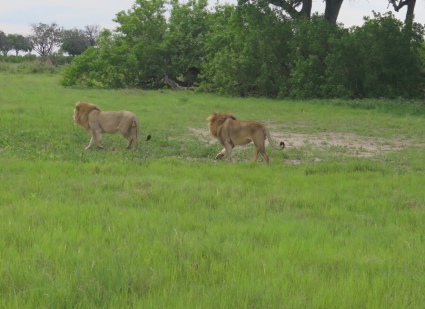 Lets asked if we wanted to see a female lion with cubs. Of course! They were lying near a termite mound under a tree. It was difficult to make them out, but the female looked very large. Bill confirmed that, saying he didn’t think he’d ever seen one so big. There are four cubs, but I could only make out two of them. One rolled over and sat up so we could see his adorable face.

It was another fabulous morning.