This afternoon, we relaxed at the camp and enjoyed the wildlife just outside our windows.

On this evening’s game drive, we spotted a troop of baboons, feeding on and along the road. It was delightful to watch them, there were many young ones, some of them small enough to still ride under the mother’s belly. This troop had two males that provided protection for the females and their young. We watched for a while, and then they all started heading up the hill across the road. We could see them walking along the ridge like a parade of baboons.

There was a large elephant feeding along our route as well. She wasn’t too happy to see us there. They don’t want any other animals nearby, and that includes people. We had attended a lecture by Bill Branch, talking about elephant behavior and vulnerabilities. Elephants breathe only through the trunk. If a predator, any big cat or a crocodile, can manage to grab the trunk and squeeze, the elephant will die of suffocation. Also, the elephant flaps its ears to cool down. There are large blood vessels on the back of the ear, if it can catch the air, the blood in the vessels will cool down and circulate that coolness throughout the body.

Quickly moving on, we paid a visit to the site where the young impala had been killed the day before. The young leopard was up in the tree where his mother had stored her kill, and was enjoying some dinner. Then, we decided to see if the lions were still around. This time, the male was sitting up posing for all of his admirers. He’s a beautiful animal and he seems to know it. The guides call him Fabio because of his full bodied mane. The females were there too, and one appears to be pregnant. 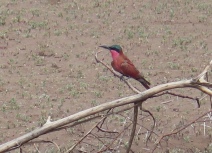 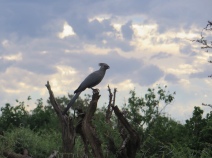 Again we stopped for sundowners. The guides set up a couple of tables with snacks and beverages and we drank in our beautiful surroundings. Tonight, we were in time to see two parades of elephants heading to the water. It was magnificent! There were elephants of all ages.

We had a lovely dinner tonight. The area was decorated for New Year’s Eve. Some of us stayed up a little later, enjoying the music and dancing a bit. I don’t think anyone saw midnight, though.

I love to travel.
View all posts by kcbernick →
This entry was posted in Africa, Botswana, Elephants, Leopards, Lions, Uncategorized. Bookmark the permalink.