We have such a short time here in Dubai. There’s absolutely no way we’ll be able to see everything. To make it easier, we signed up for a Hop On Hop Off Bus with City Sightseeing Dubai. We’ve used this type of tour in several other communities and find it to be a good way to learn some history and see some of the highlights, of which there are far more than we’ll see today. By using the bus, we don’t have to deal with traffic ourselves. It is horrendous here, with a spaghetti network of freeways. Merging can be challenging, with two of more lanes of traffic aiming for the same exit or turn. We listened to one taxi driver honk and yell his way through to our destination. That was the exception, most of the drivers were competent and calm.

The Dubai Metro is designed to combat the heavy traffic burden. Construction began in 2006, with the first stations opened in 2009. There are currently two lines, and more will be added. We have a station just outside of our hotel, but we don’t have time to learn how to negotiate it on this trip.

We boarded the bus and started our tour, going through some of the residential areas, outer commercial and retail districts and beaches. Many buildings and structures are quite colorful. There are many medical facilities here. It’s clear to us that Dubai is competing directly with the Mayo Clinic for those wealthy middle east patients. 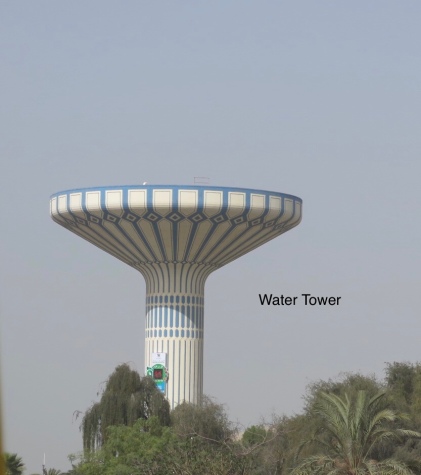 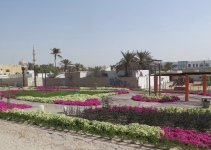 We went to Palm Jumeirah, one of two artificial palm shaped islands, made from sand and rock, in Dubai. In addition to the palm islands, there are 300 artificial islands that are intended to represent the world. Most of those islands remain undeveloped and some are being reclaimed by the gulf.

We stopped at the Atlantis Hotel on The Palm, to take a helicopter ride with Fly High Dubai. Although the sky was still hazy, we enjoyed the flight which allowed us to see some of the more impressive sights, like the Burj al Arab with its helicopter pad, the islands, Ski Dubai (enclosed ski resort,) the downtown landscape and more. 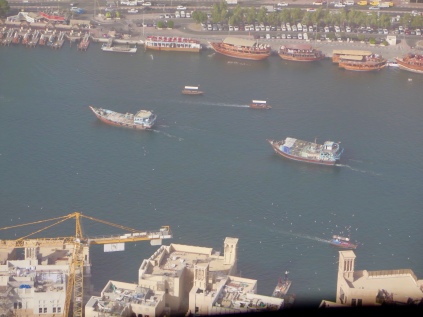 Back on the bus to view more of the city, including the soon-to-be completed Dubai Eye (intended to be bigger than the London Eye,) Dubai Creek, and more skyscrapers.

Our last stop was the Dubai Mall to see the water fountain show. Needless to say, it was pretty crowded, but I can usually find a way to see. It was an impressive show, but we still like the one at Las Vegas’ Bellagio better. Tomorrow, we have a 28-hour day, and a temperature drop of 50 degrees (not bad, really) from the time we arise in Dubai to the time we hit our bed in Minnesota. Then, it will be time to start planning the next trip to “?”

I love to travel.
View all posts by kcbernick →
This entry was posted in Burj Khalifa, Dubai, United Arab Emirates. Bookmark the permalink.