If you watch the History Channel series, Vikings, you will have seen this waterfall. In season 5, the character Floki sets sail alone from Norway and washes up on a strange land. In his explorations, he comes upon a waterfall that suddenly starts flowing backwards, which convinces him that he is in the land of the Norse gods, Asgard.

When I saw this scene, I immediately recognized the waterfall as Skógafoss, located near Iceland’s south shore, along the Southern Ring Road. Skógafoss is created where the Skógá River flows over cliffs that formed an earlier coastline. It is fed by two separate glaciers, Eyjafjallajokull and Myrdalsjokull. It is about 50 feet wide and drops almost 200 feet, with a mist that creates beautiful rainbows on a a sunny day. 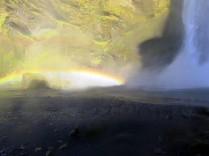 Skógafoss has also featured in “Thor: The Dark World” and “The Secret Life of Walter Mitty.” It is a very popular destination for tourists and residents alike. We were impressed with its beauty even before we reached the waterfall. 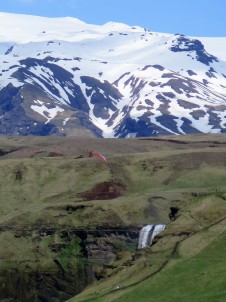 If you climb to the top of the waterfall, and follow the river upstream, there are many more dramatic waterfalls. Unfortunately, we did not have time to do that. We did walk close enough to it to get fairly wet, a small price to pay for the beauty we witnessed. It’s possible to visit in the winter as well, but you do need to watch for ice.

There is a legend attached to Skógafoss, of course. It is said that a Viking named Thrasi hid his gold under the falls. Many have tried to find the gold and one young man almost succeeded. He tied a rope to the ring of the chest handle and pulled, but only managed to retried the ring. This ring was later used for a church door at the nearby village of Skógar.

Iceland is home to thousands of waterfalls, as many waterfalls as there are lakes in Minnesota – yes, 10,000! This is due to frequent snow and rainfall as well as to glacial melt in the summers. We drove by several on our way to visit Skógafoss, but I can’t tell you their names. 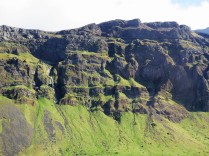 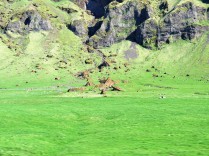 Imagine having a waterfall in your backyard.

I love to travel.
View all posts by kcbernick →
This entry was posted in Glaciers, Iceland, Waterfalls and tagged Asgard, Eyjafjallajokull, Myrdalsjokull, Vikings. Bookmark the permalink.