Traveling to the Colca Valley 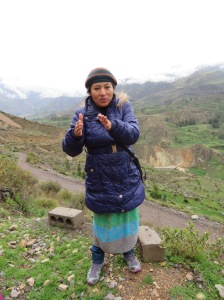 Jaimie was born in Colca. She told us that 80% of the people eat alpaca meat. Only about 15% eat lamb, and another 5% eat beef. They don’t like beef because it causes “wind in your belly.” Also, they drink Colca Sour up there, using cactus juice from Dragonfruit (Jugo de Sancayo) instead of the lemon juice. We sampled some of the fruit, which is indeed very sour, but when we drank Colca Sour, it was a little too sweet. We prefer the Pisco Sour.

The culture is still fairly Machismo where Jamie lives, in Chivay. When she was finishing high school, her father told her what career she should pursue. She said no, she wanted to go to university. They argued for 2 months, but she went to university. Her family was very concerned about her choice of career, spending time with “gringos” (any foreign person), fearing that she would be kidnapped and killed. Jamie has been working in tourism for ten years now, with no problems.

The ride to our next destination took about 4 hours, with a few short stops along the way. The volcanos in Arequipa are fogged in again today. We passed a huge cement factory outside of Arequipa. Volcanic rock is used in the production of cement. 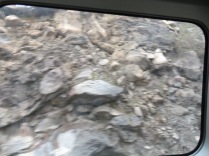 We are climbing today, with a maximum altitude of 16,000 feet. Fortunately, our final destination will be at only 12,000 feet. By 13,000 feet, we could feel the difference, a little light-headedness and shortness of breath. We stopped for some Inca tea as well as coca leaves, which we chewed to help with the altitude sickness. I’ve been challenged by high altitudes in the past, so did what I could to prepare for the elevations we’ll be at for the next week, between 12,500 and 16,000 feet. I’m not able to take the altitude medication, but find that if I drink plenty of liquids with electrolytes, and drink the local coca tea in the morning, I can handle it fairly well. We routinely pack some Propel or G2 powder packets which can be mixed into a bottle of water. These are also helpful for excessive heat.

One of our traveling companions was miserable in spite of taking the altitude medication and drinking the coca tea. Some people are more sensitive to this change. It’s best to try to acclimate slowly if possible, by staying at one high altitude for a day or two before going to the next higher. That’s difficult if you don’t have the time.

Coca grows in rainforests, as small shrubs. The leaves are collected four times per year. Besides making coca tea, many people chew the coca leaves to help with altitude sickness, or use as a stimulant, not unlike caffeine. The leaves are safe to use; it would take 800 pounds of leaves to make one kilogram of cocaine.

People who live above 10,000′ have more red blood cells that do we who live lower. When they go to lower altitude, they experience a low altitude sickness, much like we experience at high altitude.

We drove through the Salinas Y Aguada Blanca Nacional Park, where we saw vicuña and alpaca grazing the road. Some years ago, the vicuña became endangered, so Peru declared them a protected species. They cannot be farmed, but must be allowed to roam free. Thanks to moves made by the Peruvian Government, vicuña are making a comeback.

The people who live in the park are shepherds. They use little cash, mostly bartering for the goods they need. Some of the women also sell items they have made to tourists like us. 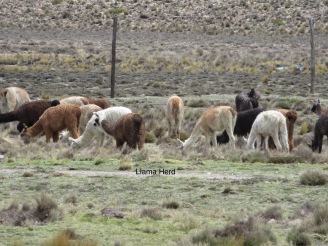 We stopped at a small shop where we tried some Inca tea. This tea is made with several herbs and coca leaves. It tastes pretty good, and helped with the altitude as we climbed higher.

At 16,000′, the highest I’ve ever been, there’s a lookout where you can see eight different volcanos. That is, you can see them on a clear day. Today, we didn’t see any. Maybe we will when we come back through in a couple of days. This view is considered a sacred area. There are stone towers that have been built to honor the puma, condor and snake. 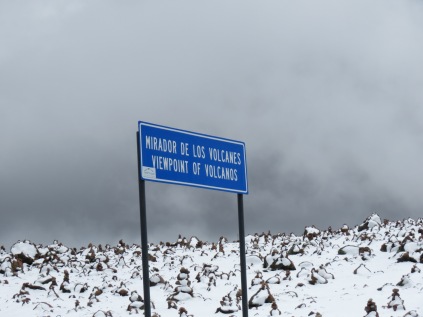 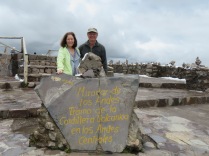 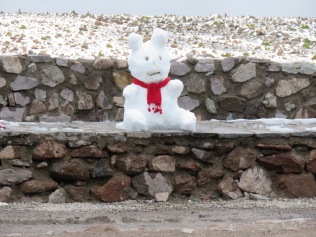 About an hour later, we had descended 4,000′ and arrived at Colca Lodge, our home for the next two days. The lodge is set in a valley, with the Colca River running past it. There are several hot spring pools on the grounds, fed by springs that are heated by the volcanos. We enjoyed a dip after lunch, and it was heavenly. The pools sit next to the Colca River, which is rolling and roaring over the rocks. 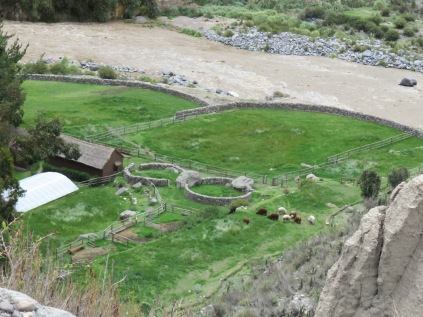 This is a small lodge, with about 50 rooms, all beautifully appointed. There is a spa on the grounds, where I had a rejuvenating massage after my visit to the hot pools. The lodge offers several activities, including horseback riding, hiking, a visit to a llama farm (which is accessed by a walking bridge over the river), or a visit to some archaeological ruins. I’m not sure we’ll take advantage of any of these activities in our short time here. We’re simply enjoying the opportunity to relax and get acclimated to the altitude. We can hear the river in our room, such a soothing sound.