We were fortunate to have visited Notre Dame (Our Lady of Paris) Cathedral in October, 2015. This iconic cathedral has graced the city of Paris for 800 years, surviving two world wars and the French Revolution. I hope that it will survive this horrendous fire, which has destroyed the spire and much of the wood interior, and damaged many works of art.

Following is an excerpt from my blog post about our visit to Notre Dame that October.

The Cathedrale Notre-Dame de Paris, built on Île Sainte-Louis between 1160 and 1345 AD, was one of the first buildings in the world to use flying buttresses. The arched exterior supports allowed the builders to construct taller and thinner walls without compromising the structural integrity of the building.

At the base of the steeple, you can see bronze statues of the twelve apostles, three to a side. Of these, only Saint Thomas is looking up toward the steeple (still questioning?) while the others look down.

The cathedral has suffered a few attacks on its features and treasures, in 1548 by the Huguenots who considered many of the features idolatrous, and again in 1793 by anti-religious French revolutionaries, and then again during World War II when some windows were hit by stray bullets.

In 1238, the emperor of Constantinople sold what is purported to be be Jesus Christ’s crown of thorns to Louis IX. The king paid more for this relic than he did for the cathedral which now houses it. It is on display under red glass, so it’s pretty hard to see. It is simply a circlet of rushes, no thorns, which supposedly held the thorns together. 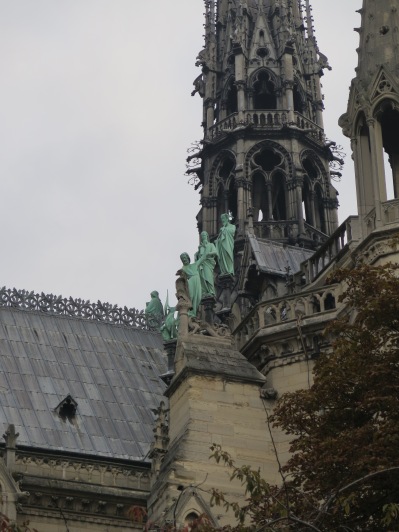 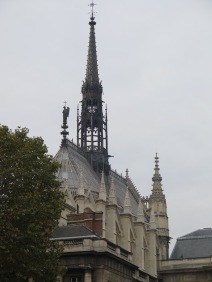 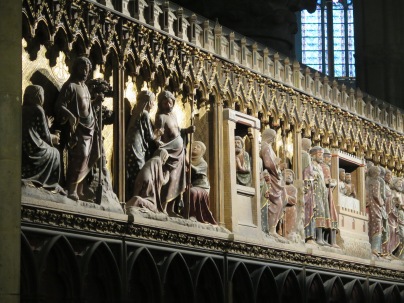 2 Responses to Tears for Notre Dame