Sated and happy, we moved on to discover that there really is more to Vermont than ice cream. We had heard that the Cold Hollow Cider Mill in nearby Stowe has delicious cider donuts, so we decided to check it out. Since we didn’t need any more sugar today, we purchased some cider and donuts for later – both lived up to their reputation. The store was chock full of cider and maple inspired goods and tchotchkes, from jams and jellies to magnets and mugs, plus everything in between.

The Cabot Farmer’s Store was just a couple miles away, and we desperately needed something protein based to bring us down from our sugar high. Cabot Creamery celebrated their 100th year as a dairy co-op, and, according to the sign in the window, it is “owned by 800 farm families.” We sampled several cheeses and must admit their cheese is mighty tasty, especially the aged cheddars. 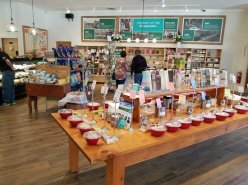 Next, we stopped at Old Route Two Spirits in Barre, Vermont. This small distillery has been in business for just a few years. They produce three rums (Maple & Ash Barrelhead, Cherry Barrelhead, and Coffee) plus Joe’s Pond Gin. The Maple & Ash rum is blended from one rum aged in a maple barrel and another aged in ash; the Cherry is in a cherry barrel, of course, and real coffee is mixed in the Coffee rum. There was also a very small batch spirit called Viking Funeral, which was distilled from honey mead. We sampled them all, and purchased bottles of the Maple & Ash and the Cherry rums, plus Viking Funeral. Inspired, my husband may try his hand at distilling some from our own honey. 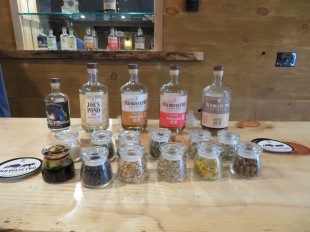 Old Route Two is just starting to produce whisky, which has more requirements than their products. To be labeled an American whisky (or whiskey), it must:

Whisky, by the way, is how the Scottish spell it, and whiskey is how the Irish spell it. The word comes from the Classical Gaelic word for water: uisce or uisge. Most, but not all, American whiskey is spelled with an “e.” Now you know.

All of Old Route Two Spirits equipment is made by Trident Stills in Maine. Old Route Two uses a 300 gallon hybrid pot still, so the batches are, indeed, small. Total fermentation capacity is 2,400 gallons. The barrels are handmade in New York from New England hardwoods.

We then visited Quechee Gorge at Quechee State Park. The 165 foot deep gorge was carved by the Laurentide Ice Sheet about 13,000 years ago. This land was once owned by the A. G. Dewey Company, which operated a wool mill here from the mid-1800s to the mid-1900’s. The mill was powered by water from the nearby falls and pond. The Army Corps of Engineers took over the land as part of a flood control plan, and built the North Hartland Dam. The State of Vermont leases and manages this lovely little park, which has several tent and RV sites attached. The lower end of the gulch was being used as a swimming hole by several young people on this warm late summer day. 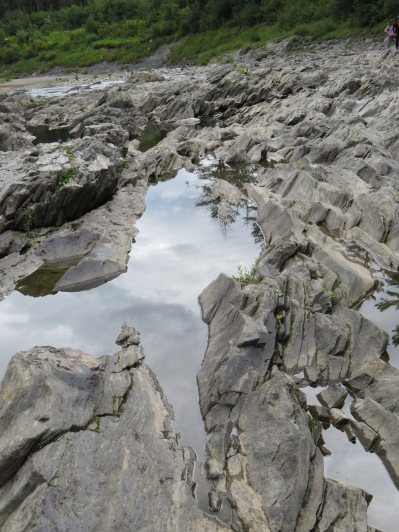 We ended the day with cider mixed with whiskey and accompanied by cider donuts. Not terribly healthy, but not so bad either.