It’s another sea day, and we listened to lectures by Ian MacLachlan about our next stop, Huatulco, Oaxaca, and by Roberto D’Alimonte about the upcoming US Presidential election.

I will refrain from discussing D’Alimonte’s presentation, although I believe it was very informative and non-biased. I’m aware that not everyone reading this will have the same point of view (hurray for freedom of thought!), and I choose not to inflict my opinions on my readers. I will talk about Huatulco, though.

Huatulco is a planned tourist resort in Oaxaca, Mexico, with development to that end beginning in 1987. There is an emphasis on lower environmental impact and more tourism experiences. Residents are encouraged to treat tourists fairly and with kindness.

Interestingly, a dry canal, intended to compete with the Panama Canal, is being considered south of Huatulco, where a ship’s load would be transferred to railroad on one side, shipped cross-country, and then loaded onto another ship and be on its way.

The sun is shining today, and the seas are not choppy, so we feel confident that we will actually stop in Huatulco tomorrow. We were told that the waters are usually calm here. We’ll know in the morning!

While enjoying lunch today, we observed several dolphins fishing off the side of our ship. Mark even saw a swordfish swim by. It’s difficult to get good shots of the sea life as it’s far below, plus they move so fast. We usually have lunch in the Trident Grill, with its blend of open air and shelter. There are several “living walls” with fresh greenery to enhance the feeling of being outside. Also, we can get our daily fix of Ben & Jerry’s (Cherry Garcia for Mark and Coffee Buzz Buzz! for me.) 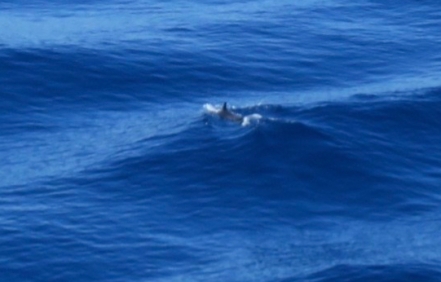 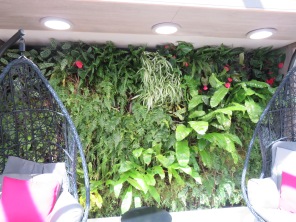 In the afternoon, we wasted two hours watching a movie, Long Shot, which wasn’t the worst movie I’ve ever seen, but it was close. I will say that it was timely since it is political, and involved a presidential election, and it was very realistic (hah!) Had we been at home, we probably would have changed the channel within ten minutes. There were some laughs, though, so it wasn’t a total waste.

Tonight’s show was “Icons in Concert,” put on by Serenity’s own vocalists, dancers and

show band. These performers are all top notch, and put on a show that left us cheering, ending with a tribute to Queen.

A few years ago, we got to take a backstage tour to see the costumes and costume conveyor (like the conveyor at the dry cleaners,) and learn about the work involved in creating the many shows on board. Our tour guide at the time also spoke about life on board (small staterooms and busy schedules.) Mark asked about how they were able to land on their feet with the rolling stage, and our guide said that it was a lot of practice, gauging which way the boat would move, and planning the landing accordingly – split second decisions. By the way, that guide is on our current cruise. We were happy to see that he is still performing for Crystal.

After the show, we stopped at the Crystal Cove for drinks, and were thrilled by a duet performance of Leonard Cohen’s Hallelujah by violin and trumpet, hauntingly beautiful.