Bartolomé Island is a volcanic islet just off the coast of Santiago Island. It sits in the rain shadow of Santiago and Santa Cruz. Bartolomé’s volcanic landscape, with its spatter cones, tuff cones and lava flows, has been featured in many movies, Master and Commander being one. Very little grows here, it seems to be a wet desert. Scientists cannot figure out why so little grows here. There are a few lava cacti, tiquilia, and even spurge. We did see some crabs near shore, a Central Galapagos Racer snake and a few lizards.

While these volcanic islands look very solid, the basalt is simply a layer over the volcanic dust/sand. Once the basalt slips back into the sea, the rest of the island will erode very quickly.

We woke up at 5:45am for an early morning walk to the top of Bartolomé. There was a light rain as we traveled by zodiac to the island. The waves were high enough to make it an adventure. The ascent consists of 376 steps, with a few landings along the way for us to catch our breath. The rain simply got stronger, so that were drenched by the time we reached the top. The only thing missing from this natural shower was the soap!

We were told that, from the top, you can see almost all of the Galápagos Islands. That may be true on a sunny day, but not today. Even so, the views were stunning, including that of Pinnacle Point. 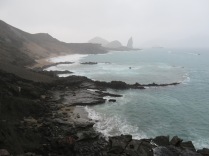 Sombrero Chino, another islet off of Santiago, was named for its resemblance to a Chinese hat. It is an islet with lava tubes and caves that provide nesting ground for Galápagos penguins. We boated here in the afternoon, and were rewarded with sightings of penguins as well as several other birds. These Galápagos Penguins are the only species of penguin that lives north of the equator. They are related to the Humboldt penguins of southern Peru and Chile. 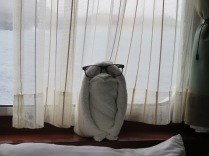 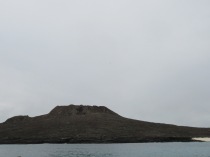 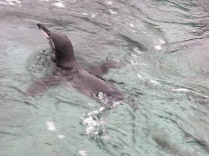 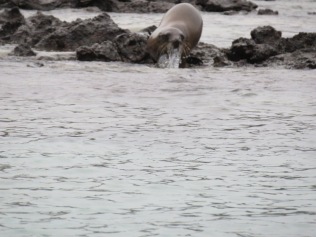 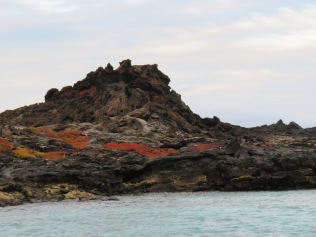 I love to travel.
View all posts by kcbernick →
This entry was posted in Galapagos, Galápagos, Uncategorized and tagged Galapagos, Penguins, sea lions. Bookmark the permalink.