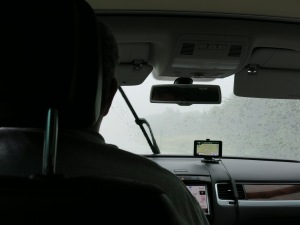 Another long day on the road, as we drove from Sycamore to Columbus, OH. We had some heavy rain throughout the day as well as a lot of traffic (at least it seemed like a lot to us small towners.)

There is a fair amount of religious fervor in our heartland. We were informed that “HELL IS REAL” by an I65 billboard, we were told that “God says to read the bible” by another, and we read about God’s love on the back windows of a couple cars driving alongside of us. Very edifying, indeed.

On the back window of a blue mustang

We arrived in Columbus around 6:00 and headed over to Deb and Jay’s home for dinner and good conversation. It was delightful to see their children, who are all “above average.” Alexis read to Paul, and Anna read to me. Evan was entertaining and Emmett didn’t say much at all, but he did smile a lot.

Early to bed as we have another long day ahead of us.

I love to travel.
View all posts by kcbernick →
This entry was posted in USA Travel and tagged Illinois, Ohio. Bookmark the permalink.

1 Response to Rain and Religion