The main purpose of this trip was to visit the Kentucky Bourbon Trail. Six different distilleries were featured in January, 2012: Old Turkey, Four Roses, Jim Beam, Woodford Reserve, Maker’s Mark and Heaven Hill, all located along the Bluegrass Parkway between Lexington and Bardstown, KY. None are more than 90 miles from Lexington.

Distilling bourbon is a time-honored tradition in Kentucky. Bourbon has been distilled since the 18th century, but the term began to be used consistently in Kentucky in the 1870’s. The US Congress declared bourbon to be a “distinctive process of the United States” in 1964. Legally, you can’t call your product bourbon unless you use at least 51% corn, and age it in new, charred, white oak barrels for at least two years. It must be distilled to no more than 160 proof and entered into the barrel at 125 proof. It must be bottled at no less than 80 proof. Also, it must not contain any added flavoring, coloring or other additives. 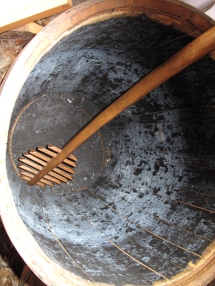 The charring of the barrel releases the sugars and gives the bourbon its hue and flavor. Most of the used barrels are sold to distilleries in Scotland for scotch, or to wineries in California. There are also some bourbon beers which have been aged in the used barrels.

In years past, people would buy the used barrels, take them home, put two or three gallons of water in them, roll them and let them bake in the sun. This process, which recaptures some of the bourbon from the barrel, results it what is called the devil’s cut. 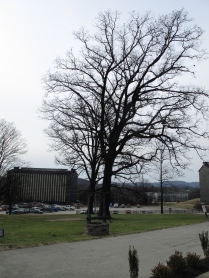 Evidence of the Angel’s Share. This is a healthy tree.

The angels get a share as well. A fair amount of alcohol evaporates during the distilling and aging processes. This evaporation causes a fungus to grown on the bark of surrounding trees and bushes, giving them a black color. That black color is the evidence of the angel’s share. Every day, the angels watch over the process, guaranteeing a good batch, so I guess they earn their share.