When we arrived in Juneau this morning, it was foggy and rainy. Big surprise! I should not be surprised that it is so humid along the inside passage of Alaska. After all, it is temperate rainforest.

Although Juneau is the state capital, that was not always the case. The original capital was in Sitka, and was moved to Juneau in 1913. When Alaska became a state in 1959, Alaskans voted to move the capital closer to the major population areas of Anchorage and Fairbanks, but that proved to be too costly.

Juneau’s main industry is government, which employs one-third of the residents. Fishing is also important as is tourism – quite evident as you walk down the streets of the city. 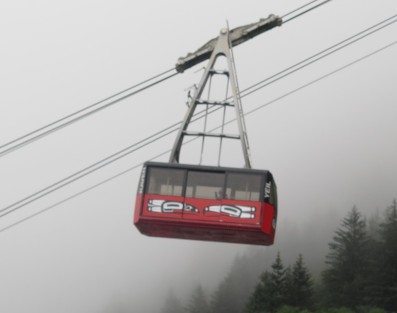 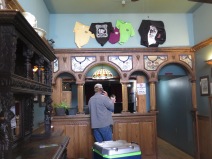 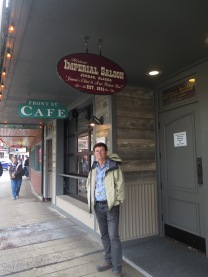 Today’s highlight was a helicopter trip to Mendenhall Glacier, where we were able to spend some time on the glacier itself. We took a 15 minute ride over the city of Juneau with Temsco Helicopters, Inc. We flew over the glacier for several minutes, which allowed us to see the extent of it. There is more than one branch, and from the air it really does look like a river of ice. There are several waterfalls falling onto the glacier and off of it. 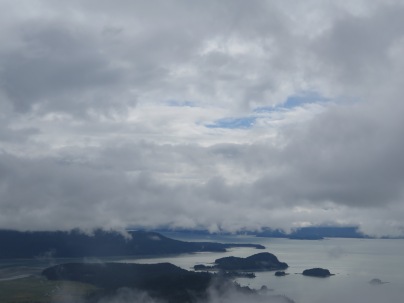 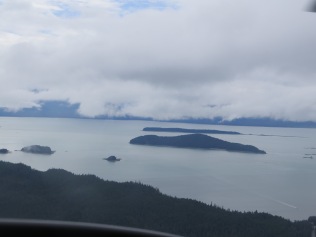 It was very windy on top of the glacier, the Alaskan flag at the base site was flying almost parallel to the ground. Our guide, Georgia, did an excellent job of explaining the composition and history of the glacier. Mendenhall is about 13 miles long, and where we were standing about 1.5 miles across. The glacier is “unhealthy,” meaning it is losing ice more quickly than adding it. It’s very wet at the top, and we had to be careful walking so we wouldn’t slip and fall. There are several streams running across. We could taste the glacial water if we wished, either safely by scooping it into our hands, or by doing a glacial pushup and slurping the water up. Mark was much more successful at that than I was. The water is cold, especially when you fall into it! 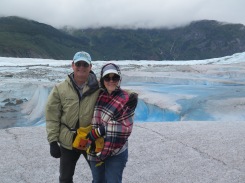 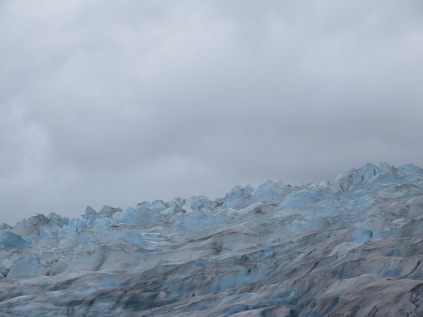 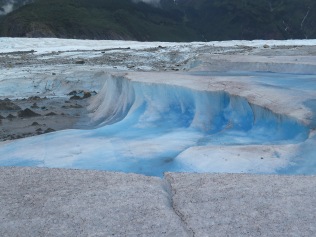 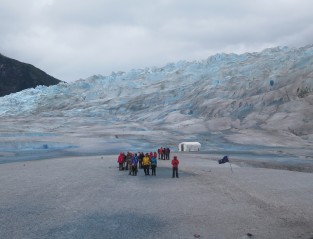 Base stop on Mendenhall

The blue color comes from the density of the compacted snow and from a lack of oxygen below the surface. Our helicopter pilot told us that the glacier actually looks more blue on a cloudy day like today than on a sunny one, so good timing for us.

Glaciers expand and contract, with crevasses opening and closing over time. Any rocks that get caught in the crevasse will be crushed to a silty granular substance. One of the shops in Juneau actually sells glacier silt soap as an exfoliant. Our guide demonstrated a far less expensive alternative to us, and told us it would immediately take five years off our looks – I should have scooped some up to bring home.

We returned to Juneau in the afternoon, exhilarated by our adventure.

I love to travel.
View all posts by kcbernick →
This entry was posted in Alaska, Crystal Cruises, USA Travel and tagged Glaciers, Juneau. Bookmark the permalink.