The wind howled past our windows last night. It had been windy most of yesterday, with winds of around 25 mph, but last night, there were gusts of up to 40 mph. On the positive side, the temperature was several degrees warmer. It was raining in the early morning, but it cleared up by early afternoon.

We were supposed to go on a tour today – Inside the Glacier – which would have allowed us to spend about 2.5 hours on and inside a glacier. We were looking forward to exploring the caves that had been built. Unfortunately, the tour was cancelled because of high wind and wet conditions – very disappointing.

So, while looking for something to do with our day, we learned that there was a free concert at the Harpa Concert Centre over the noon hour. Harpa is just a few blocks from our hotel, so we decided to check it out. Harpa is a beautiful building which has earned several architectural awards over its life. 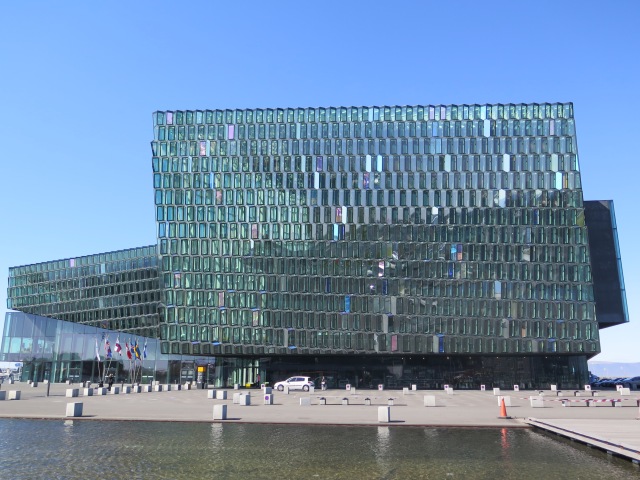 Hallveig Rúnarsdóttir is a soprano with the Icelandic Opera. She was accompanied by pianist Árni Heimir Ingólfsson, a well-known conductor, journalist, author, etc. I wish I could tell you more about them but the program was written in Icelandic and the songs were sung in Icelandic. I can say that the performance, though only 30 minutes long, was impressive. It appears that Harpa hosts these free lunch-time concerts about once a month. It was very well attended.

After their performance was complete, they did come back for an encore. Ms Rúnarsdóttir talked about the fact that Iceland’s President had personally welcomed twenty-one Syrian refugees on Monday. She expressed her concern about recent happenings worldwide, and then sang an appropriate song from “West Side Story” – “There’s a Place for Us.” It brought me to tears.

We did a little more walking around town this afternoon, stopped at a pub for a beer and a snack. Later in the afternoon, we visited another public pool near here. Sundhöllin is the oldest public bath in Iceland, having opened in 1937. While smaller than Laugardaslaug, it offered some great views of the city at night.

I think that, if I lived and worked here, I would probably visit the pubic baths on a regular basis. There’s nothing quite like a jetted hot tub to ease the strains of the day. I could feel my muscles loosening as I sat there.

After bathing, we stopped for our last dinner in Iceland, then returned to the hotel. Mark and I visited the roof to search for the aurora again, sine the KP-index was quite high tonight. Sure enough, we could see a faint arc across the sky, in between the clouds.

The KP-index is the geomagnetic score, and if the number is over 3, there is a good chance of seeing the Northern Lights, assuming little or no cloud cover. Mark has an app on his phone that notifies him when the index is high. It did go off during the night, and he peeked out the window, but mostly saw clouds.

I love to travel.
View all posts by kcbernick →
This entry was posted in Harpa, Iceland, Northern Lights. Bookmark the permalink.

1 Response to Change of Plans