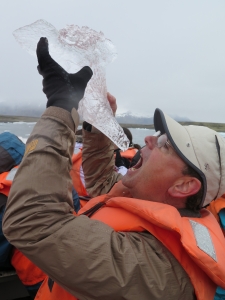 The 269 named glaciers in Iceland cover 11% of the land, or over 4,000 square miles. Almost every type of glacier is represented on this small island nation. All of their drinking water comes from glaciers, and it does taste quite good.

Many of Iceland’s glaciers lie atop volcanoes. When a volcano erupts here, the lava doesn’t always reach above the ice. In 2014, Popular Science Magazine interviewed Benjamin Edwards, a geologist at Dickinson College in Pennsylvania, who explained that “if the lava stays contained within the ice, the biggest hazards will be local flooding. (These volcano-triggered glacial floods are called jökulhlaups.)”

Just take a drive around Iceland, and you will see several glaciers. Every glacier includes “jökull” in its name. This word comes from Old Norse, and means glacier, or a mountain covered with snow and ice.

To get up close and personal with a glacier, we hopped on a bus and headed to Jökulsárlón, a glacial lagoon that is fed by Breiðamerkurjökull, which is one of the 30 outlet glaciers of Vatnajökull, the largest glacier in Iceland.

Vatnajökull, which means “water glacier” in Icelandic, is an ice cap glacier, that is, a miniature ice sheet, covering less than 50,000 square kilometers (19,305 square miles). Vatnajökull covers 3,127 square miles, with an average thickness of 1,300 feet. It sits atop at least seven volcanoes. 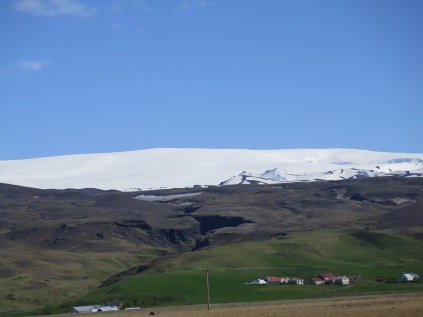 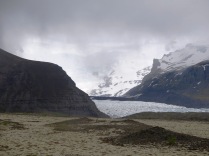 Breiðamerkurjökull has been retreating since 1890. Land movements in the mid-19th century blocked the water’s passage to the sea, thus creating Jökulsárlón. It’s possible that future land movements could unblock the lake and it would be drained. As the glacier retreats, icebergs are calving and drifting through Jökulsárlón on their way to the North Atlantic Ocean. Their movement fluctuates with the tide currents and the wind. Once they are small enough, they finally make their way under the Glacial River Bridge and out to sea. 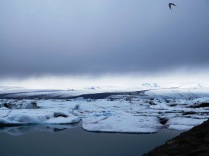 Jökulsárlón has been featured in several movies, including two James Bond movies:  Die Another Day and A View to a Kill. It was also featured in Lara Croft: Tomb Raider. The lagoon does not freeze because of the inflow of salt water from the North Atlantic. For the movie Die Another Day, it was allowed to freeze over by blocking the flow of of ocean water into the lake. 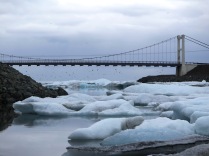 Jökulsárlón’s icebergs near shore and drifting out to sea

We took an amphibian boat (aka duck boat) tour with Glacier Lagoon. We were close enough to the icebergs to touch them if we wished.

These icebergs look dirty because they carry volcanic ash from recent eruptions like that of  Eyjafjallajökull in 2010. 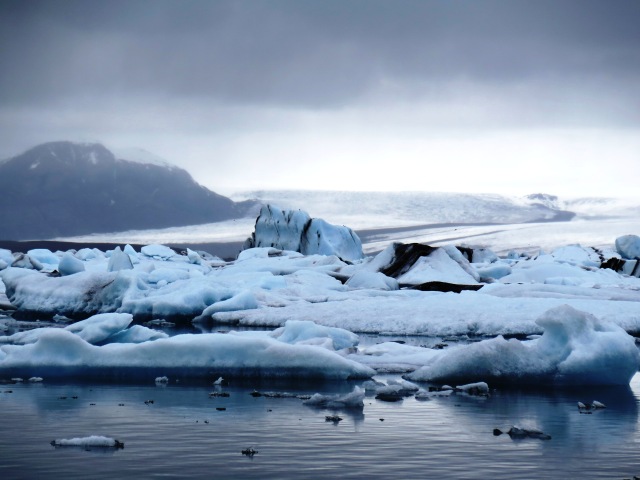 I love to travel.
View all posts by kcbernick →
This entry was posted in Iceland, Volcano and tagged Breidamerkurjokull, Eyjafjallajokull, Glacier Lagoon, Jokulsarlon, Vatnajokull. Bookmark the permalink.