While on an Alaskan cruise, we stopped in Juneau, where we decided to take a helicopter ride to Mendenhall Glacier with  Temsco Helicopters, Inc.

This glacier has had several names over the years. The Tlingit People called it Sitangiospren (“the Glacier Behind the Town”) or Aak’wtaaksitkahan (“the Glacier Behind the Little Lake”). In 1888, John Muir named it Auke Glacier for the Tlingit Auk Kwaan. It received its current name in 1891, when it was renamed in honor of Thomas Corwin Mendenhall, physicist and geologist, who was responsible for defining the exact border between Alaska and Canada.

Mendenhall is a 13.5 mile outlet glacier of the Juneau Icefield, that terminates in Lake Mendahall. It’s located about 12 miles from Juneau. The glacier has been in retreat since the 1700’s. In 2012, an ancient forest was discovered when tree stumps and logs with roots and bark still attached emerged from under the retreating glacier. Scientists have determined that these trees are between 1,400 and 2,000 years old. Studying them can provide information on the area’s ecosystem before glaciers.

We flew over the glacier for several minutes, which allowed us to see the extent of it. From the air, it really does look like a river of ice. 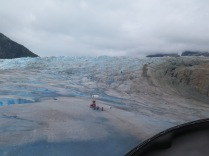 We then landed on the glacier, where it was very windy. The section where we landed is about 1.5 miles across. Mendenhall is in an “unhealthy” state, meaning it’s losing ice more quickly than it’s adding it. The ice is very wet, and we had to walk carefully to avoid falling. We scooped up some water to taste it – very cold! 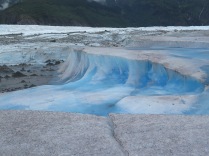 The glacier looked exceptionally blue on this day. Our pilot told us that the does look more blue on a cloudy day than on a sunny one, so our timing was good. Glaciers expand and contract, with crevasses opening and closing over time. Any rocks that get caught in the crevasse will be crushed to a silty granular substance. One of the shops in Juneau actually sells glacier silt soap as an exfoliant.

It’s not necessary to take a helicopter ride to view the glacier, as the United States Forest Service operates the Mendenhall Visitor Center, open year-round, with several trails that provide views of the glacier and lake.

I love to travel.
View all posts by kcbernick →
This entry was posted in Alaska, Glaciers, USA Travel and tagged Glaciers, Juneau, Juneau Icesheet, Mendenhall Glacier. Bookmark the permalink.