At an elevation of 12,500 feet, Lake Titicaca is the world’s highest navigable lake. There are a few lakes at higher altitudes, some formed by melting glaciers, others inside volcanic craters, but none are considered navigable by large vessels. The name Titicaca means “mount of the puma.” This may be because the lake’s shape is similar to that of a puma. The Inca considered Lake Titicaca to be the birthplace of their people.

Straddling the border between Peru and Bolivia, Lake Titicaca (Lago Titikaka) is the second largest lake in South America, covering 3,200 square miles. It’s 120 miles long, 50 miles wide at its widest point, and 920 feet deep at its deepest spot. The lake never freezes, the temperature stays around 57 degrees year round. 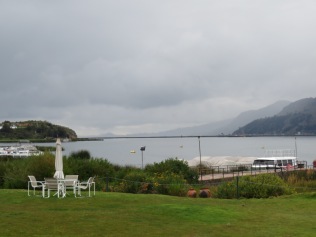 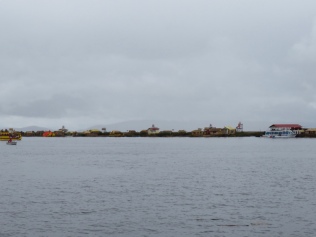 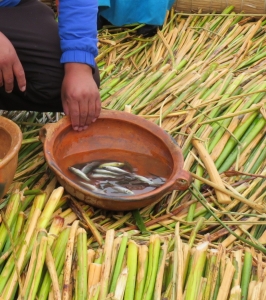 Besides the natural islands, there are the Uros Floating Islands created by the Uros people. When the Incas came to the area, the Uros people retreated to the lake. Initially, they lived on boats, but over time, started building the islands that they currently occupy. The largest of the islands holds a watchtower that is constructed almost entirely of reeds.

The Uru or Uros, descended from the original settlers 4,000 years ago, consider themselves the owners of the lake and the water. They used to say that they had black blood because they did not feel the cold. Historically, they called themselves Lupihaques, or Sons of the Sun. Approximately 4,000 people live on these floating islands. They speak Aymara, a language borrowed from people they intermarried and traded with from the mainland. This language is even older than Quechua.

The islands are made of totora reeds which grow in Lake Titicaca. There are about 74,000 acres of reeds in the lake. The reed’s dense, interweaving, roots form a natural layer, 3-6 feet thick, that supports the islands, which are anchored with ropes attached to sticks driven into the bottom of the lake. New reeds are added to the top to replace the bottom ones as they rot away. An island lasts about 25 years, then a new one must be built. Each island supports 4-5 families. Each island has a lookout tower, which was used in the past, not only to watch for danger, but to communicate with other islands. Now they communicate with cell phones. 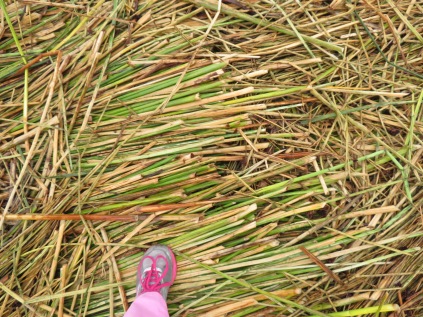 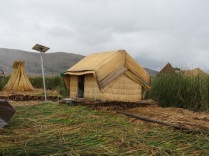 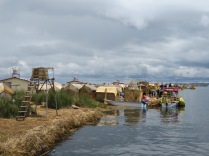 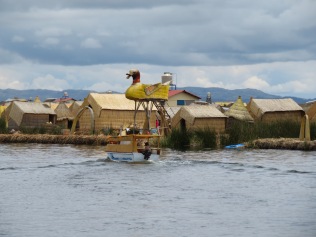 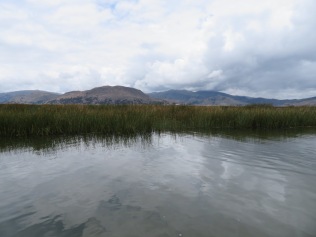 The bottom of the reeds is a source of iodine, and is also used to treat hangovers. The reeds are also a primary food source for the Uru people, and can be bartered for other foods, plus they fish and hunt birds.

We paid a visit to two of the islands. At the first one, Isla Kontiki, we enjoyed some demonstrations by a young man who lives on the island with his wife and daughter. The base of each island is about three feet of root, formed with blocks of roots that have been cut and then tied together. Several layers of reeds are place on top of this base, at least another three feet. 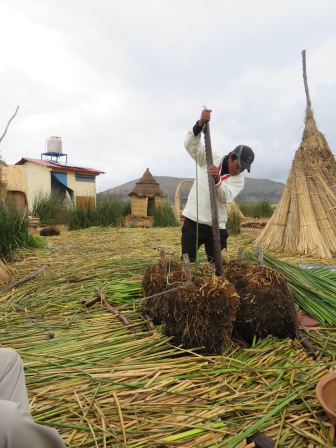 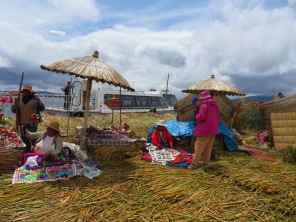 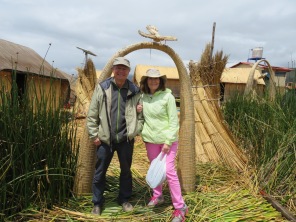 Besides fishing, the Uros hunt birds and ducks. They get many of their staples from the mainland. We did, however, see at least one potato plant on the island.

We visited the home of one family, that of the young man who did the demonstrations, along with his wife and 2 year old daughter. He speaks English, so was able to answer some of our questions. His wife makes beautiful tapestries, as shown below. One of them went home with me. The houses are not large, just one room. All cooking is done outside at a communal kitchen. Pots are placed on a large stone slab to prevent starting a fire on the floor. The islands have solar panels leased from the government to provide power. They make use of some current technology, like cell phones, while trying to maintain their ancient culture. 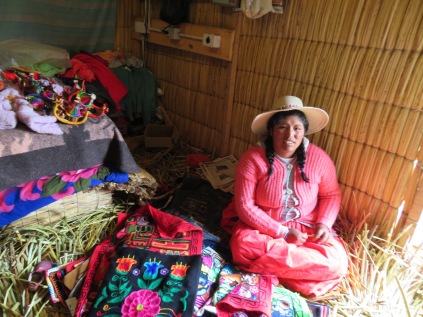 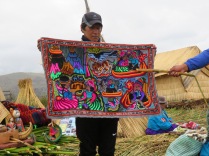 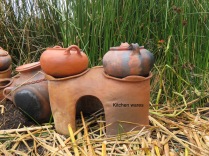 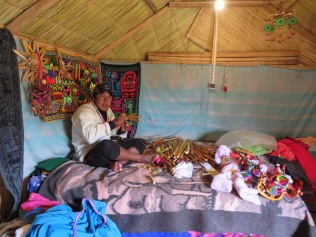 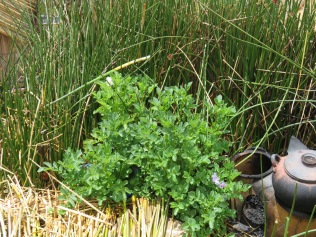 When we left the island, a few of the women sang to us. We boarded a reed boat to be rowed to the next island, which is more like a shopping center, with cafes and shops. The same young man we visited rowed along with another man. His young daughter came along for the ride. Puno residents often come here to enjoy a ride on the water and a meal on the island. 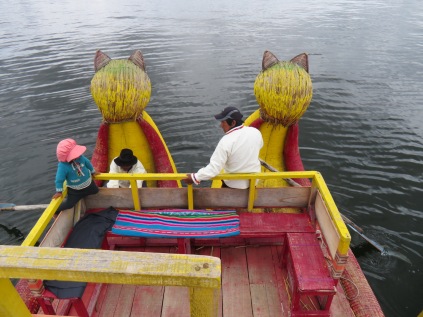 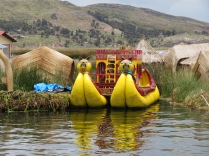 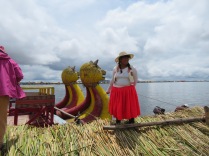 1 Response to Floating Islands of Uros