Traveling from Colca to Puno

With all of the rain, the Colca River is rising rapidly, and roiling past the lodge and the hot pools. Some local hot pools are already flooded. Those at the lodge are still about one foot above the water level. If it rises enough to flood them, the lodge will have to shut them down until the river goes down, then clean and refill them.

Dry creeks fill up, new creeks are created, and they flow where they will, without regard to the inconvenience they may cause, like washouts for instance. 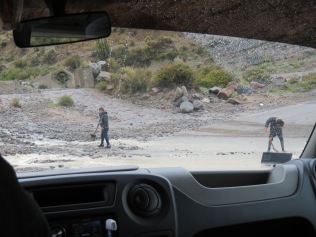 Each year in August, everyone celebrates and honors Pachamama all month, at the beginning of the sowing season. Pachamama is a fertility goddess of the indigenous people, and is identified with the Virgin Mary. During August, all of the people in the villages come together for a week to clean the canals and reservoirs. Each family also cleans their terraces. The people make sacrifices to Pachamama (food, figurines, small animals) to guarantee good soil for the coming year. Harvest starts in February. Potatoes are dried for storage – they can keep for many years. Other crops are stored as well for consumption in the winter. The name Colca means “storage.”

The sun was shining today – a lovely surprise! We have a 5-6 hour drive in high altitude. We hope it doesn’t rain or snow while on the route, or it will take longer. When we reached the volcano view at 16,000 feet, we could actually see some of them. 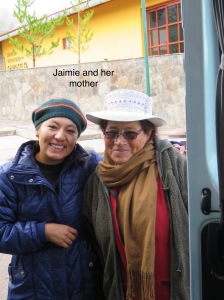 Before leaving, Jaimie’s mother stopped to give her something to deliver to her sister in Arequipa. From her hat, we can see that she is Collahua, and that Jaimie gets her beauty from her mother.

On the drive, we saw more ranches, and stopped at one where we spied some flamingos across the road! Until today, I thought flamingos were only tropical, but the Andean Flamingo lives at 15,000 feet. They are the rarest flamingos in the world. There was also a pretty duck with a blue bill, the silver teal, near the ranch. At another ranch, a veterinarian was vaccinating alpaca. There is water here, but plants do not grow very high. I found some lovely blue flowers that are about .25 inch in diameter.

At a shop we stopped at along the way, Mark spotted the tiniest frog we’ve ever seen. What an eye he has! The tiny frog must have been less than a half inch long. I got down on my hands and knees to get a shot of it.

Much of our route today goes through high dessert plateau, looking much like New Mexico or Wyoming. We made a stop at Lake Lagunillas, at an elevation of 13,000 feet, often called the “Baby Titicaca,” where I purchased my second hat, alpaca fur. This beautiful lake is surrounded by hills of green and brown. Families who live around this lake make their living from trout fishing.

Puno is located on the shore of Lake Titicaca, and is the capital city of the Puno Region, at an elevation of 12,600 feet. We drove by a new soccer stadium that’s being built by the city. The city is applying to be accepted by FIFA, which might be a challenge because of the altitude. However, that could be an advantage for the local team. Our guide said that many soccer players actually want to train at altitude to give them more stamina. 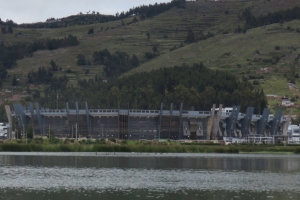 Most of the Puno District is mountain, and the rest jungle. Almost 70% of the world’s quinoa is produced here, as well as 50% of the alpaca and llamas. Recently, a very large lode of lithium was found near here, which is expected to be an economic boon.

We are staying at Hotel Sonesta, right on the lake, between two peninsulas. They make use of a couple alpaca to keep the grass short. There are also several guinea pigs running around, both mature and babies. They are delightful to watch. I do hope they’re safe from the cooking pot! 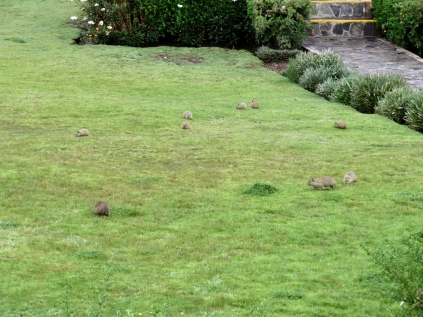 The hotel offers an unusual amenity to its customers – oxygen! Mark had been suffering from a cold for the past couple of days, so was especially susceptible to altitude sickness. We requested oxygen, and the staff brought a 5’ tank to the room for Mark to breathe from for ten minutes. He wasn’t completely cured, but he definitely felt better. I kind of wished I’d asked for a hit as well.