The Airport Loop Trail is a little over 3 miles in length, circling the airport mesa, or Table Top Mountain. It’s considered a moderate trail, with an elevation gain of just over 400 feet. Rarely is the incline steep, which does make it a fairly easy hike. You do need to watch your step, though, as the path can be very narrow along some cliffs, and there are plenty of rocks to negotiate.

The day was sunny and beautiful, so we could see most of the city, and for miles beyond, even as far as the Village of Oak Creek.

The trail took us alongside as well as on top of the red rocks. 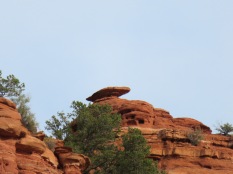 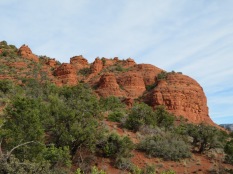 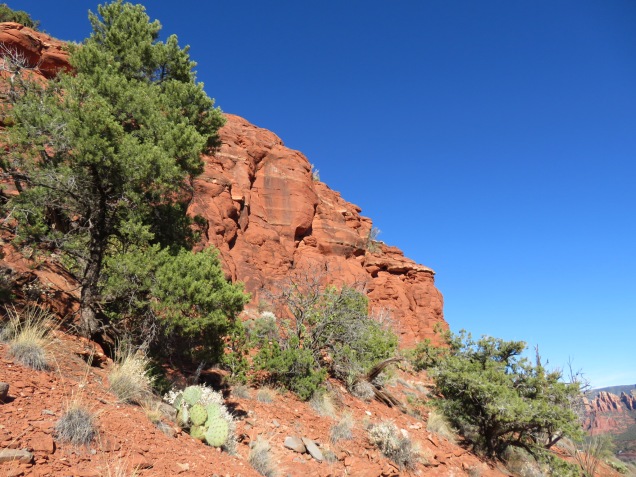 We passed very close to the airport runway, and watched a jet, helicopters and a few planes land and take off just over our heads. 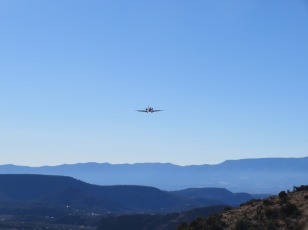 We returned to the airport mesa to hike a couple of short trails today. The first, Summit Trail, short but steep, took us to the top of a small hill just east of the Airport Mesa Loop. From here, we could easily get 360° views, a feature that Mark took Full advantage of.

This spot identified as one of Sedona’s five vortexes. (Personally, I prefer the spelling of vortices, but “when in Rome…” or when in Sedona.) Apparently, twisted juniper trees indicate the vortex energy is strong here. 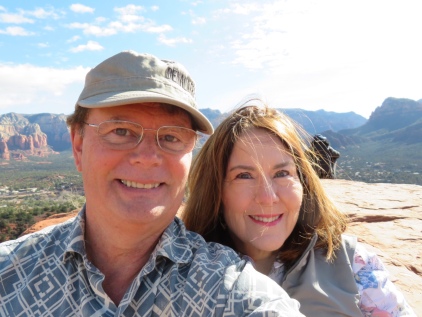 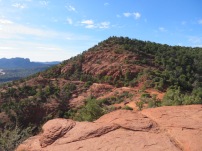 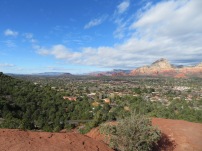 The other trail took us up to the airport, where we stopped at the Mesa Grill for lunch. Following that, we headed to the Tlaquepaque Arts & Shopping Village. The area was set up with luminaries for their annual holiday lighting ceremony tonight. We did a little shopping and left before the lighting.

I love to travel.
View all posts by kcbernick →
This entry was posted in Arizona, Sedona, USA Travel and tagged Airport Mesa Loop, Tlaquepaque, Vortex. Bookmark the permalink.