A Grand Day by Plane, Chopper and Boat

Grand Canyon National Park, celebrating its 100th birthday this year, is a destination for millions of visitors each year, coming from all over the world to view what many consider to be one of the Seven Natural Wonders of the World. Our first visit was fifteen years ago, by helicopter from the South Rim. The memories are still vivid. We were moved to tears by the stunning landscape below and beside us as we flew into the canyon.

Stretching 227 river miles, with an average width of over 10 miles, the canyon is not fully contained in the park. The West Rim lies outside the park, operated by the Hualapai Tribe, whose land includes a part of the Grand Canyon and the Colorado River. The name Hualapai means “People of the Tall Pines,” referring to the Ponderosa Pines found here.

To drive to the west rim would have taken about five hours each way, a bit longer than we wanted to spend on the road. Fortunately, Sedona Air Tours offered a day trip from nearby Cottonwood. We flew out this morning at 8:00, headed to the Grand Canyon West Airport near Peach Springs, AZ. The day was sunny, though cold, and we were treated to some lovely views of northwestern Arizona. 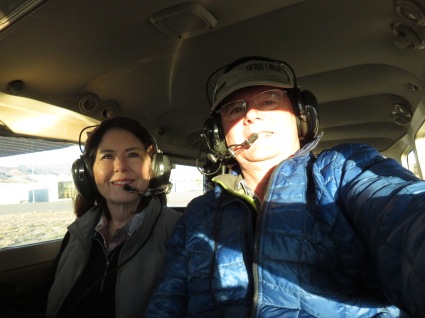 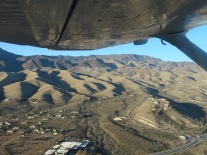 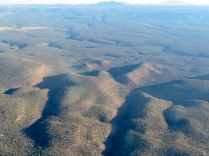 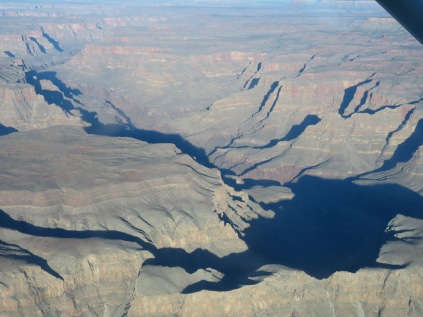 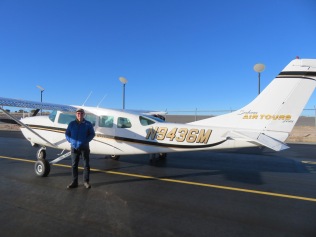 Then we hopped on a helicopter to take a ride down to the Colorado River, where we boarded a skiff for a short ride up and down the river. Again, the scenery was awe-inspiring. 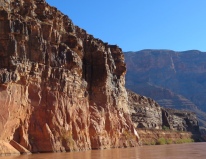 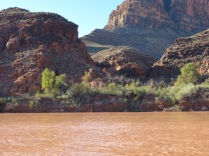 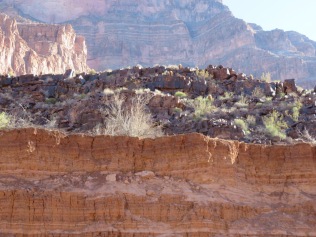 After the boat ride, we headed back to the top to walk on the Skywalk at Eagle Point. Taking 18 months to construct, the Skywalk was ready for visitors in 2005. It’s a cantilever bridge, consisting of 46 glass panels, weighing over 40 tons, with each glass panel capable of supporting 800 people (not that they could all fit physically)! A cantilever bridge is supported on only one end, in this case by eight columns that support box beams anchored 45 feet into the limestone bedrock.

Although photos online make it look quite large, it actually extends only about 70 feet over the canyon, somewhat disappointing. Granted, it is 4,000 feet above the floor, and that’s impressive. The Skywalk is located at Eagle Point, so named for a rock formation in the canyon.

We weren’t allowed to take cameras onto the Skywalk, but there were official photographers there to take cheesy photos if you wished. We succumbed, but I’m really not sure why. They really were cheesy.

Our final stop was at Guano Point, which proved to be more interesting for the views and the history. Back in the 1930’s a boater on the Colorado River discovered a guano (bat poop) cave, and thought this would be a good source for fertilizer. Guano was big business, in fact, and the 1856 Guano Islands Act claimed that the United States could claim any island that had seabird guano on it. Midway Atoll was acquired under the aegis of this act.

The U.S. Guano Corporation bought the property and cave, thinking there was more than 100,000 tons of guano in the cave. After spending $3.5 million to build a tramway system to extract the guano, they found there was only about 1,000 tons. A 7,500 foot cableway crossed the river from the cave to what is now called Guano Point. The cableway was destroyed some years later when a U.S. Air Force Fighter jet crashed into it.

After lunch, where we were visited by hungry ravens, we hiked a short trail to Guano Point, where there were great views of the Colorado River as well as the surrounding rock. 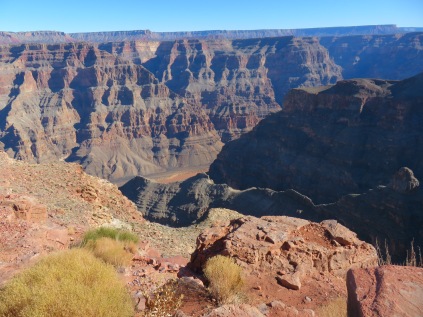 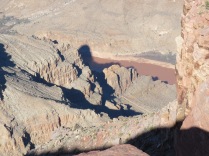 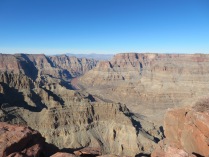 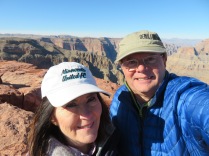 We did enjoy the day, and think this was the best option from Sedona. Similar trips go out of Las Vegas as well, although it is a much shorter drive from there.