I try to get to the gym each morning, so I can work off the many calories consumed each day. This morning, though, I gave in to laziness after about five minutes. I don’t want to do anything more strenuous that turn the pages of a good book. I brought five along, and have donated four to the library already. I do have a few on my IPad as well, so I don’t run out.

We did take time to listen to Ian MacLachlan talk this morning about “Putting the Panama Canal in Context: Geography and Politics.” Canals have been around for ages. The precursor for the Suez Canal was the Canal of the Pharaohs, constructed in ancient times, and following a different route.  It linked the Nile to the Red Sea. It’s not known exactly when it was completed, but work did start under the pharaohs, perhaps in the 1800’s BCE. The problem of salt water leaking into the Nile wasn’t solved until around 274 BCE when engineers under Ptolemy II invented the water lock. It seems to have been in use until the mid 700s AD.

The next speaker, Jim Brochu, actor and playwright spoke about Lucille Ball, whom he had befriended in her later years. It was an opportunity to learn more about this multi-talented actress and her career.

On the first formal night, we noticed people going into the Stardust Club at dinner. One other passenger mentioned to us that it only happens on formal nights and that we really should do it – it is wonderful. We weren’t even aware of this, as it wasn’t an option on our last cruise two years ago. Yesterday, we received an invitation to the Stardust Supper Club. It looks to me like the ‘supper club” can accommodate about 200 people. The Crystal Show Band played throughout the evening, accompanying a lovely singer with a beautiful voice (I’m embarrassed to admit that I don’t know her name). The Crystal Dance Ensemble also performed. It was a lovely evening, reminiscent of the days when supper clubs were the venue of choice for an elegant evening. Several couples took advantage of the opportunity to dance, including us. It was a very romantic evening. 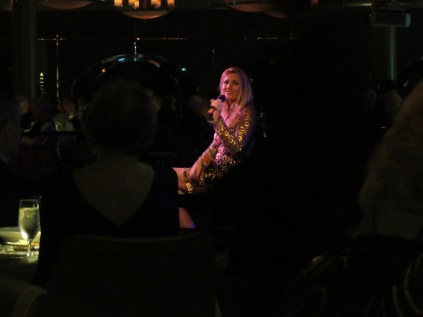 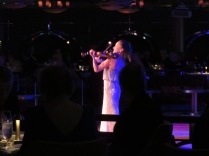 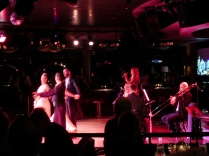 I love to travel.
View all posts by kcbernick →
This entry was posted in Crystal Cruises, International Travel, Uncategorized and tagged Crystal Serenity, Supper Club. Bookmark the permalink.