Thundering Wings of an Eagle

We pulled into port about 8:00 am. Cloudy and drizzly, which is normal. Ketchikan is known as the Rain Capital of Alaska and experiences an average of 162 inches of rain annually, with measurable precipitation 240 days of the year. 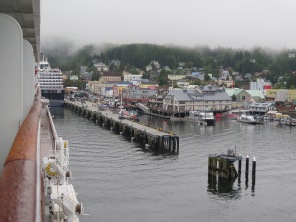 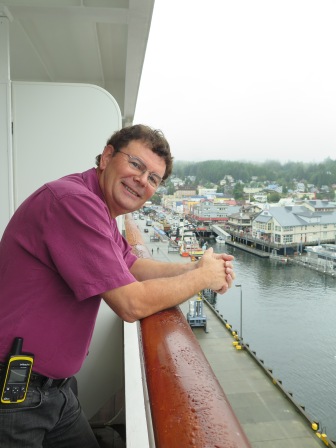 The native Tlingits called the place “Kitschk-him” which translates to “thundering wings of an eagle.” Tlingits fished for salmon here during the summers. When the white people came here, they also began to harvest salmon, and also mined for gold and other minerals in the surrounding hillsides.

Mining died out in the 1920’s, and the salmon declined in the 40’s, but the lumber industry became a vital part of the city’s economy. Salmon is big here, with Ketchikan also known as the Salmon Capital of the World.

We headed out this morning with Alaska Travel Adventures to Harriet Hunt Lake. Our bus driver, Nina from Orlando FL, regaled us with stories and legends of Alaskans and Native Americans, which made the 40 minute trip fly by. She told us about the Fireweed flower, growing along the road. It blooms from the bottom to the top. Legend has it that once the top flowers bloom, snow is only six weeks away. This flower gets its name from the fact that it is the first plant to return after a fire.

Upon reaching the lake, we boarded one of two canoes, each carrying about fifteen passengers – ours with guide, John from Asheville NC. Mark and I were fortunate enough to be at the front of the canoe, except that we couldn’t see if the other passengers were pulling their weight (I’m thinking we were doing all of the paddling.) This pristine lake is nestled between hills, and reaches a depth of about 300 feet. While we weren’t fortunate enough to see any wildlife, we were not disappointed overall. 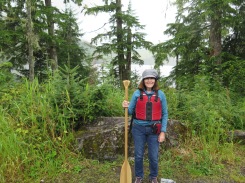 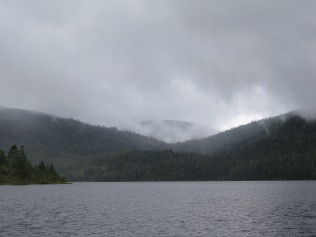 We stopped for a short hike through the surrounding rainforest. Our guide, John, did an excellent job of explaining the sights. Among the trees in this area are towering cedar, Sitka spruce (the Alaska state tree,) and western hemlock, among others.

Fallen trees often become nursery logs for other plants in the rainforest. Moss is the first to grown on the decaying tree, then other plants and trees begin to take root. After the fallen tree has fully decayed, the remaining trees will have root systems above ground. These systems are called stilted trees.

Back in Ketchikan, we strolled along a few of the streets. Many of the homes are built into the granite cliffs, and the downtown areas are accessible only by steep staircases or funiculars. There is even a trundle road, a road bed built to extend the driving surface over the land available. 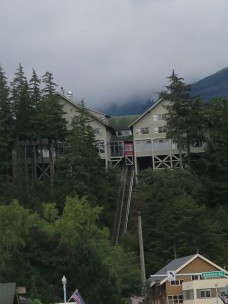 There is a sculpture by Dave Rubins in downtown Ketchikan, The Rock, which honors Ketchikan’s past, including Native Americans, logging, mining, trapping and aviation.

By the end of the day, the fog had lifted and we were able to see the surrounding city and hills – truly lovely. 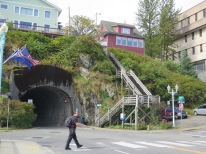 The only tunnel that you can drive through, around and over! 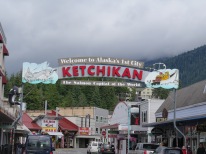 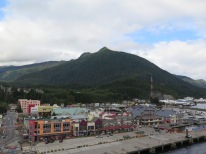 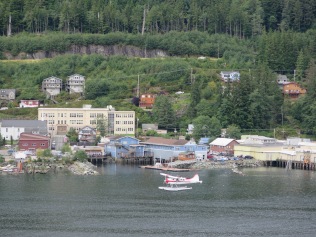 I love to travel.
View all posts by kcbernick →
This entry was posted in Alaska, Crystal Cruises, Uncategorized, USA Travel and tagged Ketchikan, Tlingits. Bookmark the permalink.