We enjoyed a tour of central Quito this morning. The day was a bit cloudy, with a drizzle that turned into a heavier rain by afternoon. This is the beginning of the rainy season for Ecuador, and our guide was very happy to see the rain as the city has been very dry. With just a little rain, the flowers bloom and the plants and trees green up.

Our first stop was at the top of El Panecillo, a hill of volcanic origin, located south of central Quito, with panoramic views of the city. It’s also a favorite place to fly kites, and we did see a few trapped in the trees along the way. The hill provided a good view of the Basilica del Voto Nacional, a neo-Gothic building constructed over a period of almost 100 years. It seems many of Quito’s churches took several decades to be built. We had a good view of our hotel which is situated across from San Francisco Church and plaza. 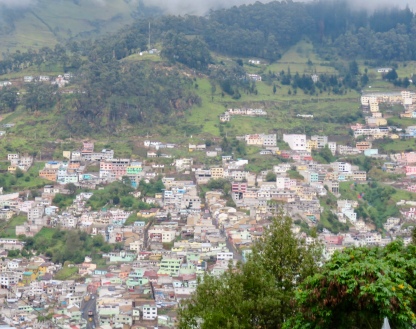 There is a 250’ monument to the Virgin Mary at the top of El Panecillo, designed by Agustín de la Herrán Matorras in 1976. It was inspired by a statue in the San Francisco Church called The Dancing Madonna because she is not standing in a prayerful pose, but rather a joyful one. These Madonnas are said to be the only ones in the world with wings. 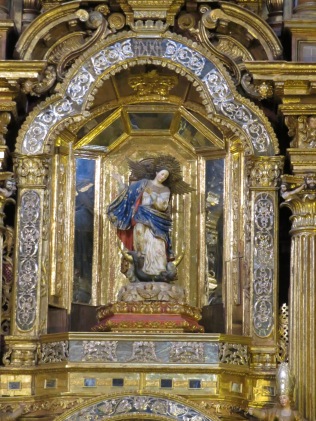 We paid another visit to the San Francisco Church, then made our way to the Church of La Compañia de Jesus, built by the Jesuit priests. Construction of this church happened over a period of years from 1605 to 1765. The interior design is baroque, very ornate with carved stone and wood covered in gold leaf. No photos were allowed.

We also stopped at Independence Square (Plaza Grande), home of Carondelet Palace (presidential palace built in the early 1800’s), the seat of Ecuadorean Government. On the other side of the square is the municipal government headquarters. On a third side is the home of the Archbishop of Quito.

The center of the square is graced by the Independence Monument which was erected in the early 1900’s. There were many people enjoying the beautiful flowers and trees  today.

We walked down a few of the streets and visited a local market. We always enjoy visiting the markets since they give a better sense of the foods and culture of the countries we visit. At this market, there is a large section devoted to natural medicine. Customers come here to get a “prescription” for whatever ails them, usually a concoction of herbs that may be rubbed on the body steeped for a tea or bathing. We saw one young child being “cleansed” with herbs that were being rubbed on her. 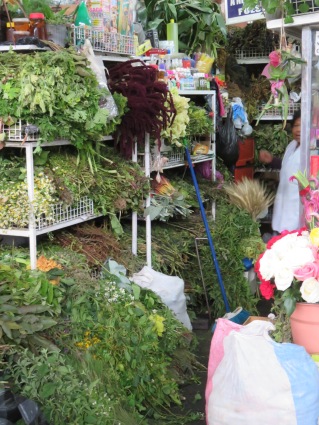 There were no flies at this market, apparently there isn’t enough oxygen at this altitude for them – one good reason to live here. Another reason – there are no mosquitoes here! Among the interesting products for sale were cow’s hooves, used in a stew enjoyed by the local people. 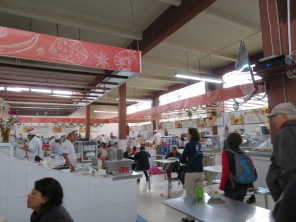 Traffic is very heavy in Quito, and the streets are quite narrow in the older part of the city. There are many buses bringing people in to work, and the streets are barely wide enough to accommodate them. The population of the city is about 2.3 million and another 300,000 come into the city for work. The daily commute has become long and frustrating, so the city decided to build a subway system, the Quito Metro, to alleviate the problem. There will be 15 stations running from south of the city to north of the city, with one stop across from San Francisco Square. Construction began in January, 2016, and the tunneling was completed this past October. The city hopes to have it on line by July, 2019.