In the afternoon, we went ashore again, this time at Prince Philip’s Steps, named in honor of Queen Elizabeth’s husband when he visited this island. Before disembarking, our zodiac driver brought us to a spot on the walls of the cliff where Fur Seals were sitting. The Fur Seal is actually a sea lion, it received its name because of its fur. These animals have been hunted in the past for their skins.

After arriving at the steps, we hiked 90 feet up a rocky stairway through a narrow fissure to the cliff top, with the “steps” still slippery from the rain. Once at the top, the trail traverses a Palo Santo (holy tree) forest, where we saw red-footed boobies and Nazca boobies nesting. Oil from the Palo Santo tree is sometimes used in aromatherapy, and the wood can be burned like incense. It’s used in traditional ceremonies to ward off bad energy. Genovesa’s volcanic rock is slowly being broken up by plants, an early step in the process of creating soil. 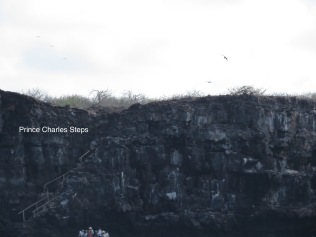 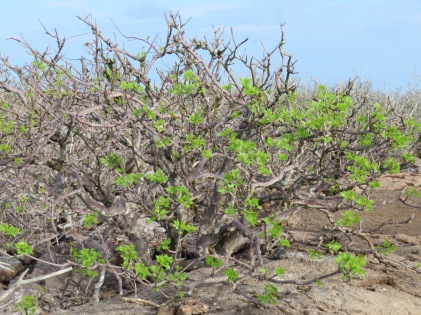 The Nazca boobies lay two eggs, usually about 5 days apart. After both have hatched, one chick will push the other out of the nest, in order to guarantee enough food for itself. We did see a couple of examples of this “siblicide” in action. It’s hard to watch; we are tempted to rescue the outcast, but this is nature’s way of improving the odds of at least one surviving to adulthood. Both the Nazca and the blue-footed boobies use siblicide when there are two eggs, but the red-footed booby only lays one egg. 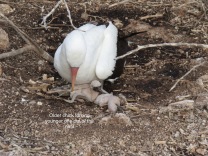 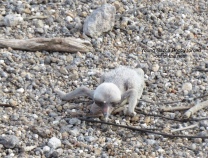 Unfortunately, not all of the remaining chicks make it to adulthood. There was a young Nazca booby that had died just short of maturity. The mother was staying near her dead offspring, walking over to it, even sitting on top it, trying to get a response. perhaps hoping it would come back to life. Again, sad to see. I do wonder how long the mother will wait before giving up.

We walked to a rocky cliff where storm petrels, frigatebirds and red-billed tropicbirds were fishing. This volcanic island is full of fissures, where the tropicbirds like to hide. We were able to find a couple of the tropicbirds inside the fissures, plus a few more sitting on the rocks. 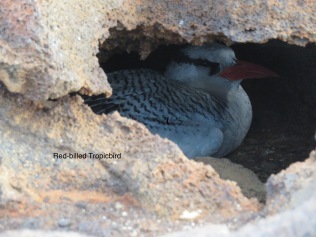 Short-eared owls sit on the rocks waiting for their dinner. These owls dine solely on storm petrels, which become easy prey after the sun sets and they return to the land. It can be hard to spot the owls as they blend in with the background, and don’t move anything except their heads. They turn their heads back and forth, using echo location to find their prey. 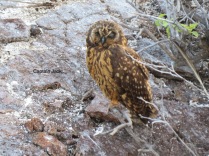 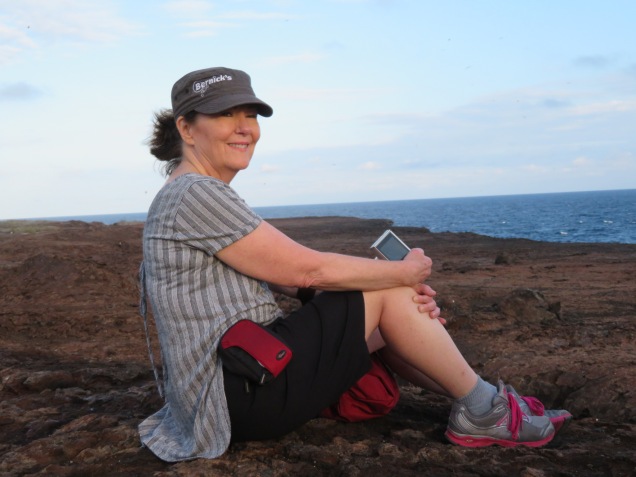 Our guide told us about one short-eared owl who had successfully fought off three young males to keep his territory. Dubbed “Captain Jack,” by the guides, this owl lost an eye in the fight. The episode occurred about six years ago, and Captain Jack is still in control. We did see this owl as well as two more along the path.

We arrived back at our ship after a very satisfying day. We are ending our time in the Galápagos on a high, wishing we could stay longer. This place is magical – so many differences in terrain, flora and fauna from island to island. I have learned much about the various animals and birds living here, and about the efforts being made to keep these islands pristine, to allow the various species to live in their natural habitat. Hopefully, Ecuador can continue to keep the islands as they are.