A few places around here are named for Montezuma, the Tenochtitlán ruler from the 1500s, although there is no evidence that he ever visited this area. We had visited Montezuma’s Castle in 2012, but weren’t aware of Montezuma Well at that time. We set out to find it on this sunny day in Sedona.

Shortly after entering the site, visitors can stop at an ancient pithouse, built around 1050 AD. Several families may have lived here, or it might have been used as a community facility. There are several holes in the base, the largest of which would have held the support timbers for the house. Smaller holes show the boundary where the wall posts were set up.

The Hopi called Montezuma Well “Yuvukwa” (sunken spring) or “Tawapa” (sun spring); the Yavapai called it “Ah-hah-Gaithersburg-gygy-gah” (broken water). This place is considered a holy place of emergence in some tribal stories.

Montezuma Well, a National Monument, is a natural limestone sinkhole formed thousands of years ago. The water comes from the nearby Mogollon Rim, having fallen there 10,000-13,000 years ago, and seeping through rock and limestone before reaching this location. Each day, 1.5 million gallons of water come up from two vents 150 feet below the surface. The water flows out through and underground passage to Wet Beaver Creek about 150 feet away. Sometime around 1050 AD, the local people created a ditch to divert water to their fields. The ditch continues to carry some of the overflow.

During its journey from Mogollon Rim, the water became saturated with carbon dioxide, so much so that fish cannot live here. There are only five species living here, and they are endemic to the well, meaning they are not native to anywhere else in the world. These are a water scorpion, a shrimp-like amphipod, a leech, a snail and a diatom (single-celled alga). Birds and waterfowl do stop here, though, to enjoy a swim or drink of water. 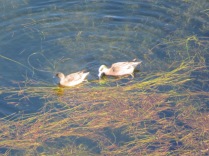 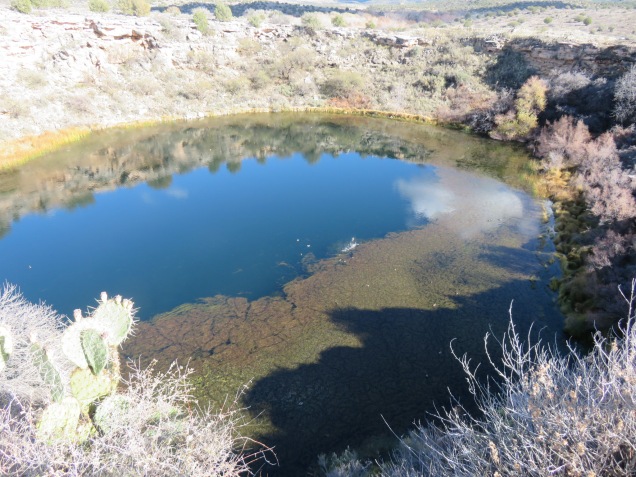 Humans have lived here in the past as evidenced by the cave and cliff dwellings as well as the water diversion ditch. This was probably not the healthiest location – arsenic has also been found in the well, but it was occupied for quite a long time.

Bats live in the cave dwellings now. In the past, some local entrepreneurs painted signs on the walls to advertise their products.

I love to travel.
View all posts by kcbernick →
This entry was posted in Arizona, National Parks, Sedona, USA Travel. Bookmark the permalink.